Students of the Ukrainian Catholic University (UCU) spent their summer studying in places like Harvard University, Rome, and other locations. UCU’s Academic Department prepared the article BELOW (translated by UCEF) and the students themselves provided the photographs.

Self-Development Without a Break During the Summer Semester: UCU Students Study at Schools Abroad

Summer was a busy time for the Ukrainian Catholic University. Students had an opportunity to relax during the break. Staff enjoyed their time off. Nevertheless, almost all were involved in intensive summer schools on the premises of the university or beyond, in particular, abroad. A number of students who have already returned from programs shared their impressions and await the new academic year.

Sviatoslav Hnizdovskyi, a graduate of the history program: “The Harvard summer school is a seven-week academic program that gives students a choice of 419 courses. Among these are, for example: Astronomy and Society; Reality, Desire, and Epic Forms: Homer, Dante, Joyce; Neuroeconomics; and Frida Kahlo’s Mexico: Culture and Revolution. During their studies, the participants have access to all the resources of Harvard University: libraries, sports and research centers, and laboratories. 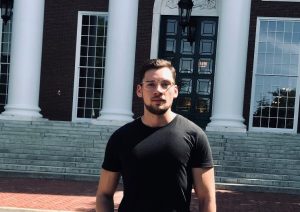 “I chose two courses at the Harvard Ukrainian Research Institute for which I received a grant for study. As part of the program State-Society Relations in Modern Ukraine, we considered basic political, social, and economic processes in Ukraine and Eastern Europe from the perspective of various theories of the political sciences. There was also attention given to comparing the dominant ideologies of the 20th centuries: communism, fascism, and liberalism. Another course, Tradition and Modernity in the 19th and 20th Centuries, had the goal of illustrating the transition from traditional to modern society, with the example of the history of large Ukrainian cities and national minorities.”

Ivan Lopatynskyi, a 3rd-year student in the Ethics-Politics-Economics program: “Often even in the academic field we narrow and simplify the idea of Europe, imagining geographic, and sometimes economic and political, unity. Europe, however, is a much wider phenomenon. The summer school European Humanism in the Making helped expand these boundaries of understanding. 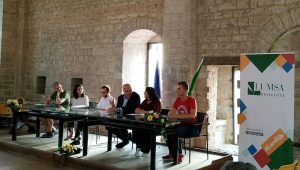 “During an intensive week, we considered Europe as a unity in culture, values, politics, and society. We discussed its scholarly and literary achievements. Combining experienced, quality teachers with a group of talented students with entirely varied academic interests made the summer school informative, interesting, effective, and different from classic European studies. 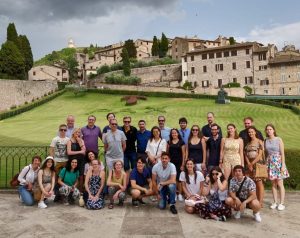 “In general, the theme of Europe and European integration has been the main theme in the Ukrainian political discourse of the last few years; Europe itself is moving in the direction of a political crisis. With this in mind, for me as a future political scientist, an understanding of the fundamental principles of Europe, which I gained during the program, is helpful.”

Orest Apostoliuk, seminarian at Holy Spirit Seminary in Lviv, 4th-year theology: “This summer I had the opportunity to take part in a summer school on the Church’s social teaching, which was conducted for young people of Central-Eastern Europe. This is the second time that the Pontifical University of St. Thomas Aquinas, the ‘Angelicum,’ has conducted such a program. The main theme was immigration. We considered particularities of this phenomenon, its positive and negative sides, and the Church’s attitude and reactions to it. 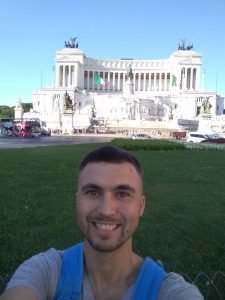 “During the school we presented our own social projects, ones we’ve already done or plan to do. The program also combined visits to an immigration center in Italy, the office of Caritas International, and the Vatican Secretariat. We also spent an entire day touring Rome. We were at St. Peter’s Basilica. We had evening gatherings in various cafes in the city, where we had pleasant interaction and tried Italian food. It was a wonderful week in sunny Rome, which helped expand my worldview. Now the school’s participants have an opportunity to submit their articles to the university’s periodical publication.” 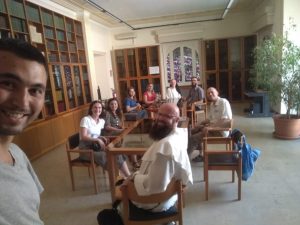 Anna Dobrohorska, a 2nd-year student in the Artes Liberales program who studies history: “This year I had a wonderful opportunity to take part in the school Waves and Ebbs of Democracy: Lessons Learnt from Central European ‘There and Back Again,’ which was held at Masaryk University in Brno, Czech Republic. Over a three-week period, the other participants and I together studied and discussed the processes of democratization in Central Europe after the collapse of the communist system in 1989. On the example of the countries of the Visegrad Four, we considered historical, political, economic, and legal aspects of the transition to democratic government in the country. 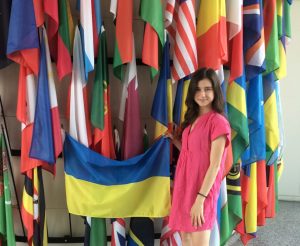 “The school’s main goal was concealed in the name: to draw conclusions and learn lessons which can be applied to the analysis of processes of democratization in one’s own country. For me, the knowledge I gained was exceptionally useful, because I was able to notice parallels between what was happening in Central Europe and what is now developing in Ukraine, to find many points of intersection and understand why this is happening and what the possible consequences are. 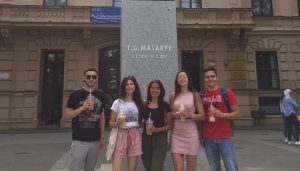 “In addition to the academic part, cultural integration was an important part of the program, because students from the whole world took part. So I spent three weeks with students from El Salvador, Australia, the USA, Canada, Belarus, Georgia, Ethiopia, Palestine, Iraq, Hong Kong, Cambodia, Mongolia, and Kenya. We all became good friends. We were able to learn many new things about various cultures and compare them with our own. The most important thing that I understood about this project was that everything depends on what kind of a person you are and not from what part of the world. Regardless of similarities and differences among cultures, it’s always possible to find a common language. The main thing is simply to be open.”

Sofia Danylchenko, a 3rd-year student in the Ethics-Politics-Economics program: “I can’t hide that I always dreamed of travelling abroad to study. When I received an offer to study at the Survey of International Organizations program at the University of Fribourg, I didn’t hesitate. For a month, together with American, British, and French students, I studied how international organizations like the UN, CIS, EU, etc. operate. In addition, we had the good fortune to spend time in their headquarters and directly communicate with the people who work there. Daily we had lectures by speakers from various countries and various fields of activity. No less interesting was team work with other participants. 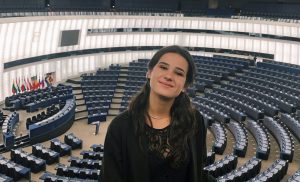 “In such a seemingly short period of time, I received very much more than I expected. Inasmuch as I study at the EPE program, this program was very informative for me. And, even though practically everything was new for me at the lectures, without the knowledge I gained in the program over the last two years, it would have been very difficult to process the information. 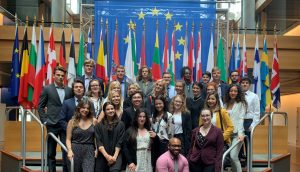 “In addition to interesting material, spending time in Switzerland, which has a developed economy, a high standard of life and interesting politics, left definite impressions. This country, to a certain extent, made it clear that politicians and citizens can be responsible and work professionally, each in his or her own sphere, which I would really like to see in Ukraine. Thanks to this program, I discovered more interests and motivation to move forward in the area I’ve chosen.”

We congratulate the students for the outstanding experience they gained in the last months and expect them in class soon!

Photos from the students’ own archives.