2020 UCU Teacher of the Year/Sociologist Interviewed

Oksana Mikheieva, a professor of sociology at the Ukrainian Catholic University (UCU), was one of three professors named UCU Teacher of the Year in 2020. Translated excerpts from an interview with her follow.

Mikheieva has been at UCU since 2014. She teaches sociology, business ethics, and the ethics of daily life. She talks about her forced departure from Donetsk to Lviv, how she got involved with UCU, and her award in 2020.

[Interviewer] Your scholarly path is closely connected with two disciplines, history and sociology. What influenced your choice?

[Mikheieva] When I was in 5th grade at School #32 in Donetsk, my history teacher invited us to a lesson given by noted archeologist and university professor Dorota Tsveibel. As she spoke about archeology, about our past, I was enthralled and that, to a certain extent, guided my further choices. I chose history and never regretted my choice. At that time, when I studied at university, there was no discipline of sociology taught in Ukraine… I “became acquainted” with sociology later… Eventually it became my “second profession.” I know the value of both history and sociology and never chose between them. I’m glad to have relations to both disciplines, and from time to time I find something new and interesting in their intersection.

[Interviewer] You’ve worked now at the Ukrainian Catholic University for more than six years: the tempo here is crazy, many activities, new acquaintances, inquisitive students. What was and remains the source of your inspiration?

[Mikheieva] That’s a difficult but simple question, at the same time. I’m not afraid of a crazy tempo. That’s the usual rhythm of my life. Many activities is also good, because then you have a choice and can receive what you directly need. There are many of us and we are all different, but at UCU someone can find something for all tastes. For example, I discovered the Radruzh Iconography School… 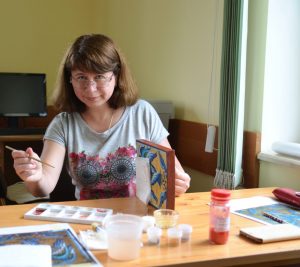 I was involved in research before I came to Lviv. But at UCU I found the possibility to conduct interesting research which is not simply studying some social problem but partially “a search for yourself,” your place in the history of your people, looking at yourself from inside and out. I’m speaking, first of all, about a number of our research projects involving Ukrainian immigrants in France, Poland, and the USA, which we implemented with the friendly team of the Sociology Department. In particular, I discovered the world of the Ukrainian diaspora, its role and influence on the life of Ukraine today…

[Interviewer] In 2020, you and two of your colleagues were named Teacher of the Year. Did you expect this, and what does it mean for you?

[Mikheieva] I don’t know. It’s difficult for me to talk about this situation in categories of “expectations.” When I saw the list of six nominees from which the commission had to select only three winners, I thought I was incredible fortunate because I wasn’t a member of this commission, because I couldn’t choose. I had strong arguments to support each of the nominees. I then wrote about this, and I’m ready to repeat now: many people work at the Ukrainian Catholic University who do not simply treat the university as a place of work but conscientiously take moral responsibility for what they do. At UCU the word “service” is often heard which, for me, fairly well explains the role that UCU staff play… 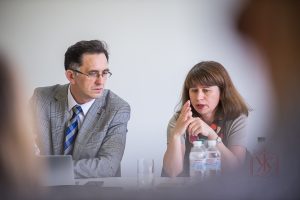 Oksana Mikheieva with Dean of the UCU Social Sciences Faculty Volodymyr Turchynovskyy at a presentation of the results of the project “Ukraine’s hidden tragedy: Understanding the outcomes of population displacement from the country’s war torn regions,” which they conducted with colleagues from the universities of Oxford and Birmingham.

[Interviewer] If you speak about the university, why did you once choose it? What distinguishes it from other educational institutions?

[Mikheieva] I hope that we have a mutual partnership with UCU. I did not entirely choose UCU. When I was forced to leave Donetsk because of the Russian aggression and occupation of my city, I myself chose Lviv… The kind words of my friend and colleague Viktoria Sereda [also an UCU professor] made this choice possible. At a difficult moment of indecision, a misunderstanding of what was happening, a direct threat to our lives, she said: “Come here. We’ll think of something”…

Oksana Mikheieva with Dean of the UCU Social Sciences Faculty Volodymyr Turchynovskyy at a presentation of the results of the project “Ukraine’s hidden tragedy: Understanding the outcomes of population displacement from the country’s war torn regions,” which they conducted with colleagues from the universities of Oxford and Birmingham.

I came to Lviv with no idea where I would work. And then a miracle happened – a whole chain of somehow accidental meeting, unexpected proposals, and I ended up at the Ukrainian Catholic University. I’m glad that happened, because I found the kind of environment which I hungered for my whole life. This is a place free from corruption, which does not poison relations between people, does not create unpleasant situations. For me, the moral component of instruction is important, and the values which are produced at UCU are not dissonant with mine, so I’m comfortable. Of course, like at any living institution, UCU faces a number of external and also internal problems and challenges. It’s impossible otherwise. We often have hot discussions because of various internal questions. However, I see in this rather advantages than flaws. Because the presence of discussions demonstrates that we are working in a team rather than an administrative hierarchy. So, sometimes we win, sometimes lose, but we still have the opportunity to defend our values.