By Diana Motruk|2021-10-19T18:52:01-04:00September 28th, 2021|News|Comments Off on Myroslav Marynovych Fills Hall for Lecture at the University of Notre Dame on ‘Faith in Communist and Post-Communist Europe’

UCU Vice-Rector Myroslav Marynovych, dissident, human rights defender, founding member of the Ukrainian Helsinki Group, during a working visit to the USA gave a lecture at the University of Notre Dame du Lac on the theme “Faith in Communist and Post-Communist Europe.”

A large number of people came to the meet Myroslav Marynovych at the Nanovic Institute for European Studies. During the lecture he shared his personal experience of suffering repression against the Church and of its situation after the fall of communism.

At the beginning, the director of the Nanovic Institute, Clemens Sedmak, while presenting the lecturer, noted that Myroslav Marynovych was formerly a political prisoner in the GULAG who, having an unbroken spirit, remains a strong moral authority for many Ukrainians. According to Sedmak, Marynovych’s strong moral foundation is reflected in his book “The Universe beyond Barbed Wire,” in which the author shares his memories of 10 years of imprisonment in a concentration camp and in exile. This year an English-language translation of the book was published. 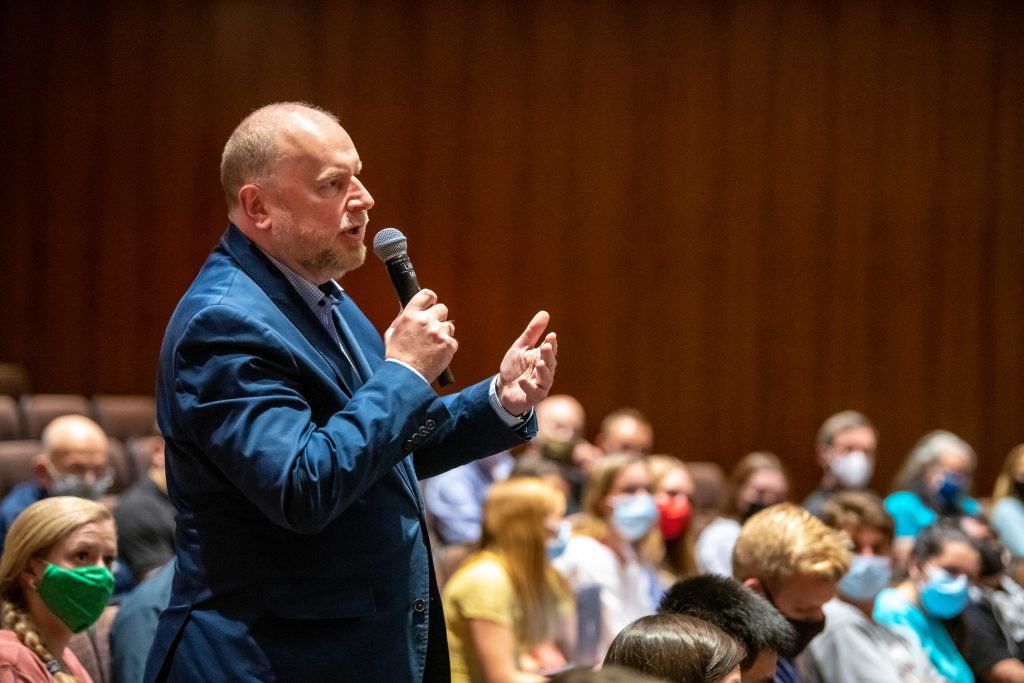 Marynovych began his lecture with reflections on how many events happened in the history of Ukraine in the 20th century before his eyes. He shared memories of his grandfather, a Greek-Catholic priest, whom the Soviet authorities imprisoned more than once during the post-war suppression of the Ukrainian Greek-Catholic Church. He recalled a classmate whom he defended because the university administration tried to punish him for having a church wedding, and he recalled how any religious expression was strictly forbidden during his imprisonment in the 1970s-1980s at a work camp.

This trajectory of oppression, he notes, was fortunately cut short. Ukraine has enjoyed 30 years of independence and the establishment of religious freedom, which, according to Marynovych, remains one of the greatest achievements of Ukrainian democracy. “Having witnessed so many somersaults in the religious history of my land,” Marynovych stated, “I give myself the moral right to make certain generalizations that will enable us to trace both the tragic ‘kidnapping’ of Eastern Europe by the communist ‘Zeus’ and its turbulent return to the family of nations.” Marynovych argued that “from a religious perspective, communism was a huge mutation of the human spirit.” When communism invaded ordinary world civilization, he explained, people transferred what belongs to God to a godless earthly Caesar. Further, the “communist faith” took on its own quasi-religiosity, a set of new spiritual parameters that undermined the spiritual homeostasis of humanity. 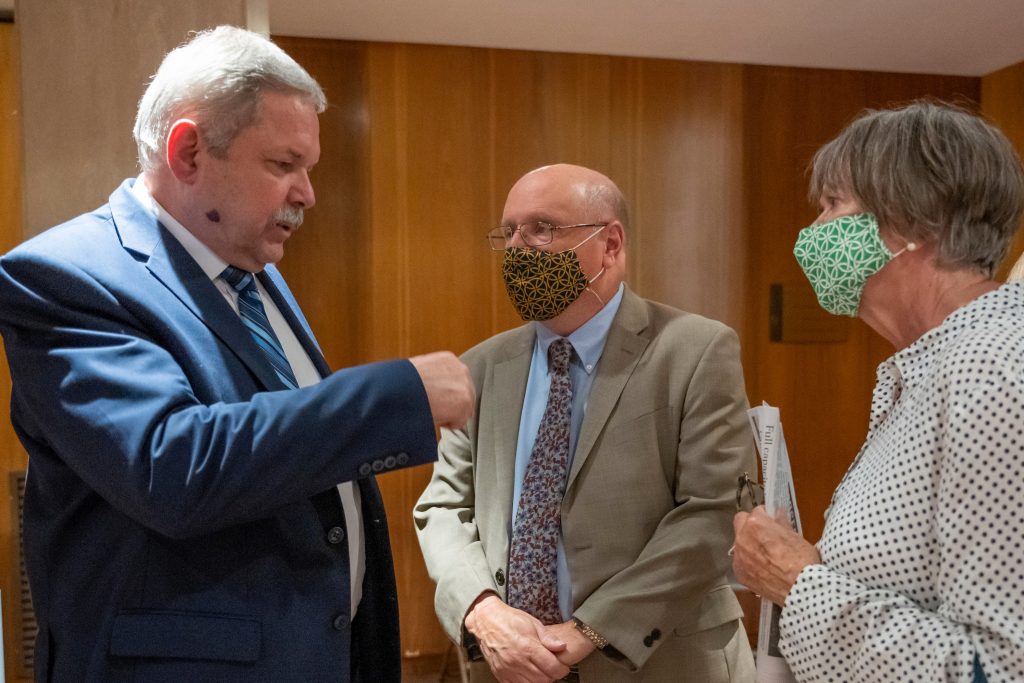 To illustrate this point, Marynovych shared a recollection from his trial, in which the judge interrupted his attempt to quote Vladimir Lenin by exclaiming: “Stop pronouncing the holy name of Lenin! It sounds like a sacrilege in your mouth!”

Having become a spiritual and worldly monster, Marynovych continued, communism turned Eastern Europe into a “bloodlands,” (so-called by Yale historian Timothy Snyder), a site of mass extermination, destruction of religion, acceptance of violence, and relativization of morality.

He also reflected on his own life and experience in Ukraine, which he spoke of as a window into Eastern Europe at the time of communism and after its fall.

The full lecture can be viewed in a recording.

In May 2021, the English-language translation of the book of Myroslav Marynovych’s recollections was published, “The Universe behind Barbed Wire. Memoirs of a Ukrainian Soviet Dissident.” The author of the introduction and a promoter of the English-language publication is noted historian Timothy Snyder. More information is available HERE 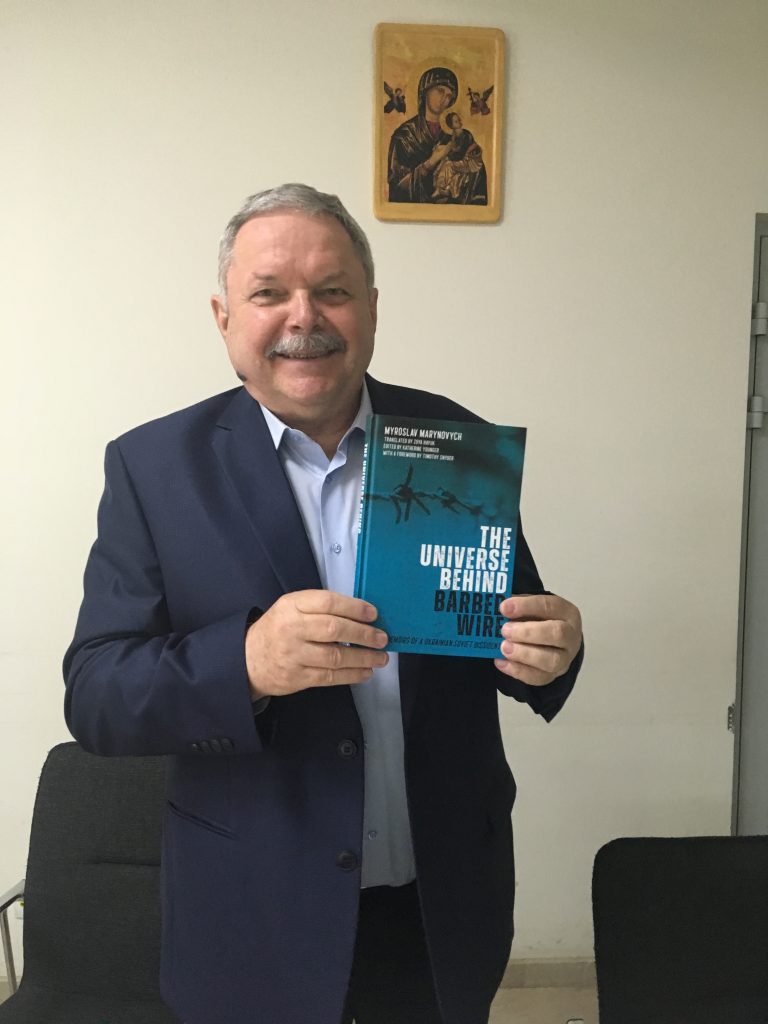