Dear Friends of UCU, Your recent emails and messages of support inspire us with great hope and gratitude. Our University for now is safe, and our campus has been unharmed.Ukraine has again suffered from the brutal terrorist acts of the Russian Federation. Massive rocket strikes across the territory of Ukraine began at 6 a.m. (Kyiv time) on October 10th. The explosions shook Lviv, Zaporizhzhya, Mykolaiv, Odesa, Kyiv and many other cities. In most large cities throughout Ukraine, the civilian population and critical infrastructure were struck with the aim of cutting off electricity and terrorizing civilians. Our campus was also temporarily left without communication, electricity, and water supply. However, we quickly engaged our additional diesel generators, and our campus was able to restore its basic electricity and water. 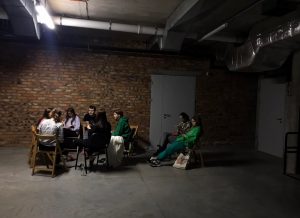 Students, professors, and staff of UCU in shelters during the air raid alert.

All buildings on the UCU campus are equipped with shelters, which have been reinforced since the war began. Each building has an adequate supply of water. During the air raids, students, employees, and residents of our dormitories were safe. The campus became a hub of relief where the basic necessities were provided: water, communication, Internet connection, and hot meals. 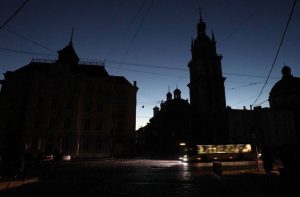 The city of Lviv is completely without electricity after the attack. Source: Andriy Sadovyi

For the safety of our community, classes were suspended on October 10th and 11th, while the entire city coped with a lack of communication and electricity. Thanks to the quick work of communal services, on October 12th, electricity and water supply were fully restored in Lviv, and UCU has now returned to its hybrid learning format. On October 17th, we plan to resume in-person learning once again. 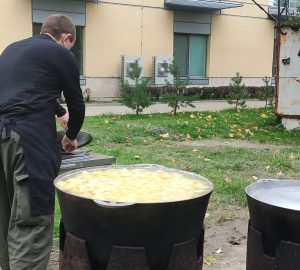 Dinner being prepared outdoors, despite the blackout.

We understand that the situation in Ukraine changes almost every day, and any family or student may face new complex challenges, including financial ones. Therefore, we constantly monitor the circumstances and unique situations of our students. 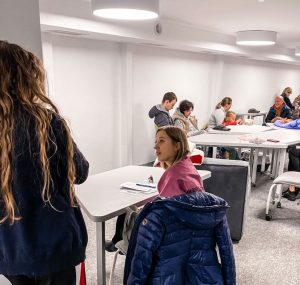 Learning continues, even during an air raid alert.

Unfortunately, the war continues, so the risk of additional strikes is exceptionally high. We are preparing for a difficult and cold winter. Nevertheless, despite the terrible actions of the Russian army, our faith in the Armed Forces of Ukraine and our victory only strengthens and grows.

Thank you again for your support of our University.