“I thought I would see depression in Ukraine, but I found love for life and hope here,” Archbishop of New York Timothy Dolan

By Larissa Nycz Montecuollo|2022-05-03T17:03:47-04:00May 3rd, 2022|Crisis in Ukraine, News, UCU Foundation News|Comments Off on “I thought I would see depression in Ukraine, but I found love for life and hope here,” Archbishop of New York Timothy Dolan

“I thought I would come to Ukraine and see great depression. Yes, I see sadness and pain, but I am impressed by the vitality, hope and solidarity of Ukrainians,” said Archbishop of New York, American Cardinal of the Catholic Church Timothy Dolan, who visited the Ukrainian Catholic University today, May 2nd.

Together with the RCC Archbishop-Metropolitan of Lviv Mechyslav Mokshytsky, Cardinal Timothy Dolan met with the leadership of the Ukrainian Catholic University, with the families of IDPs who found refuge at UCU during the war, and with student volunteers at the Volunteer Center.

Sharing his impressions of his visit to UCU, Cardinal Dolan said: “I see Ukrainians welcoming internally displaced persons. I see Ukrainians giving their rooms and houses to those who have lost their homes, such as here at the Ukrainian Catholic University. I see Ukrainians volunteering and working on water, medicine and food supplies. I see people who are patriots. I see Ukrainians who do not allow evil to say the last word. Life will overcome darkness. Life will defeat death. There is no depression in Ukraine, there is hope. I feel encouraged to be here in Ukraine,” said the Archbishop of New York. 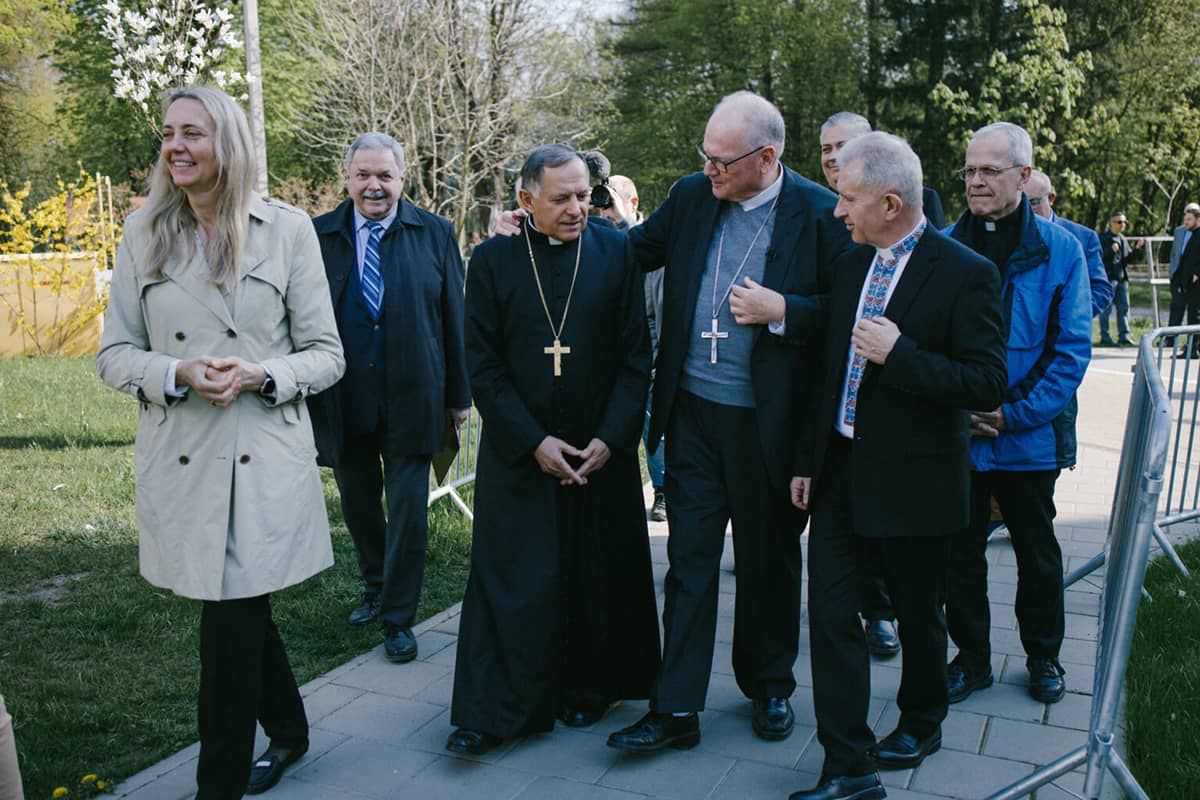 When asked what the cardinal would like to tell the Americans about the situation in Ukraine, he replied: “Wherever I go, Ukrainians say to me, ‘Thank the Americans for their love and support.’ I will definitely pass on this message to them and express my great gratitude from the Ukrainians to the American people.” 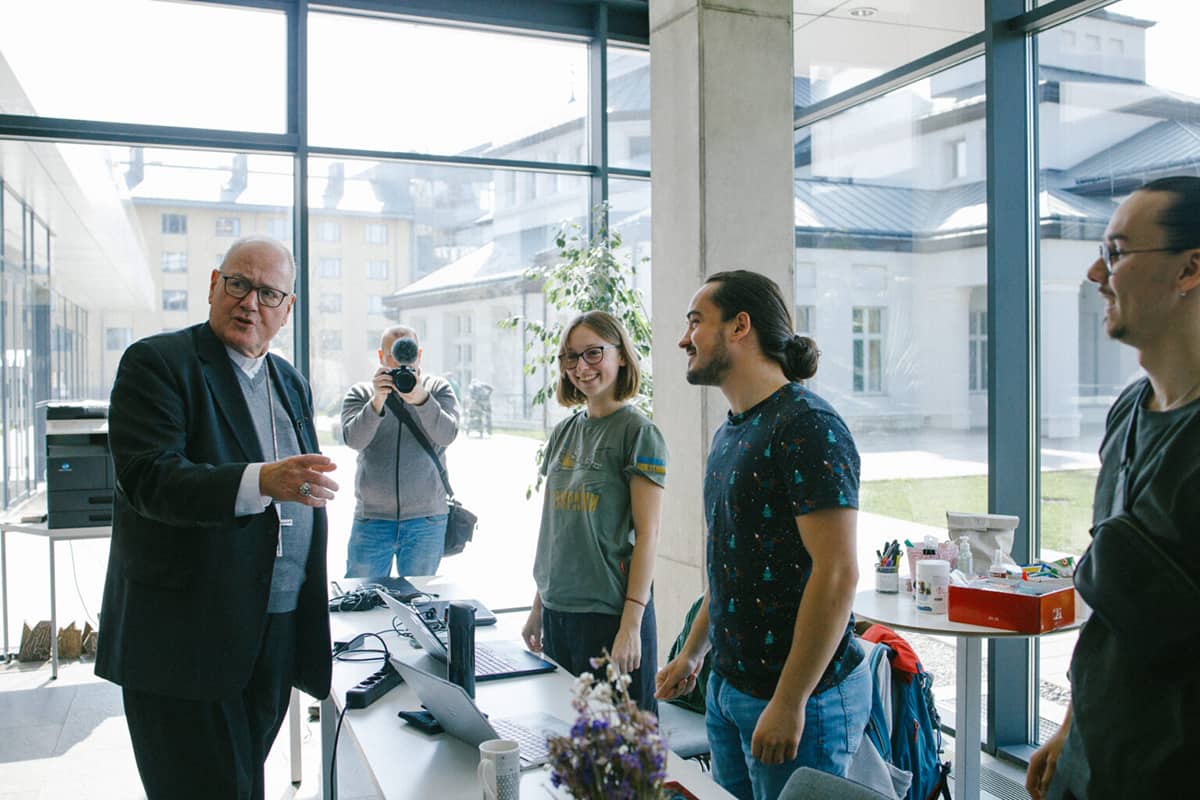 Archbishop Timothy Dolan met with students who organized a Volunteer Center to help the military, medics and migrants

During his visit to UCU, the cardinal visited the campus: the Church of Saint Sophia – the Wisdom of God and the UCU Sheptytsky Center, where he met students who organized the Volunteer Center at the beginning of the full-scale war. The cardinal talked with the volunteers about the sorting of medicines and food in warehouses, sending aid to the hospitals, the military and migrants. He also asked how the educational process is organized at the Ukrainian Catholic University during the war. 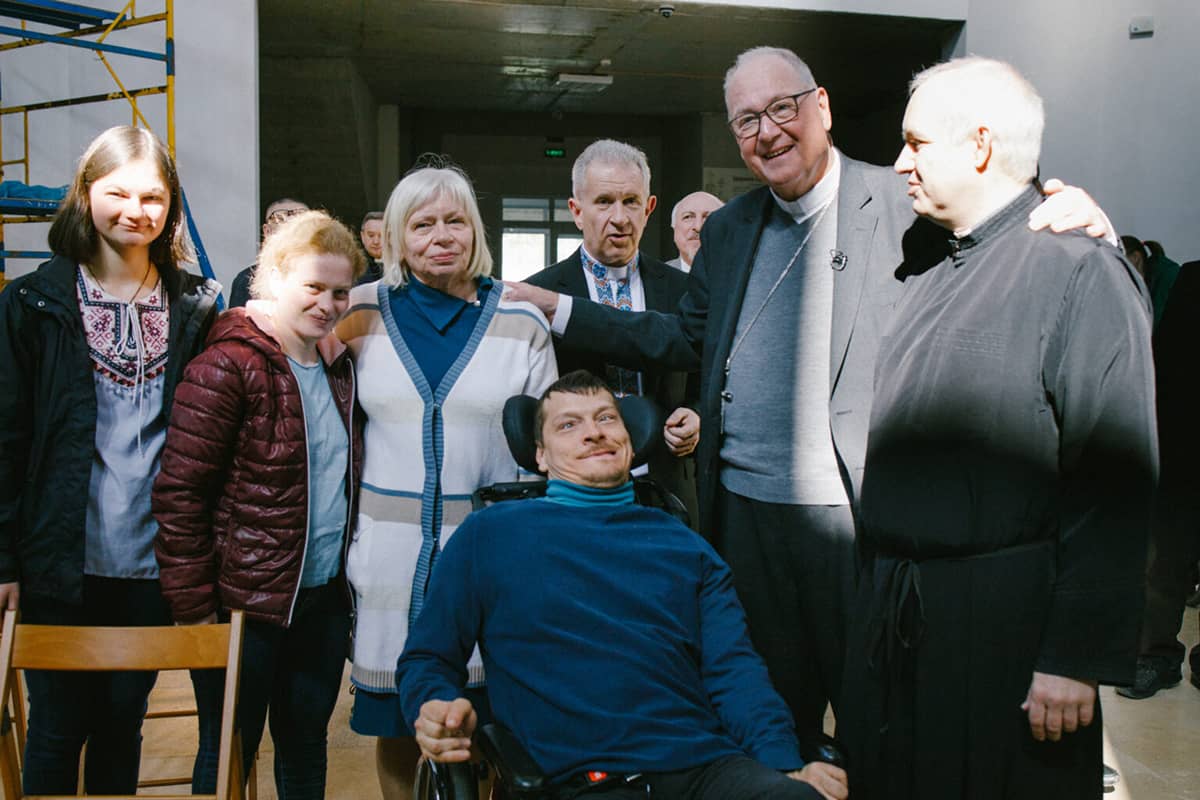 UCU Vice-Rector Myroslav Marynovych presented to His Eminence the Memorandum on the Needs of Ukraine. According to Myroslav Marynovych, today Ukraine is struggling not only with Russian invaders, but also with Putin’s propaganda, which provokes misinformation in society and creates an inability to distinguish truth from falsehood. Therefore, according to the vice-chancellor, there is a risk that the decisions of governments or religious organizations may be based on distorted information prepared by Russia in advance. Such decisions can be harmful and dangerous for Ukrainians because they are not based on truthful information and do not reflect the real situation. 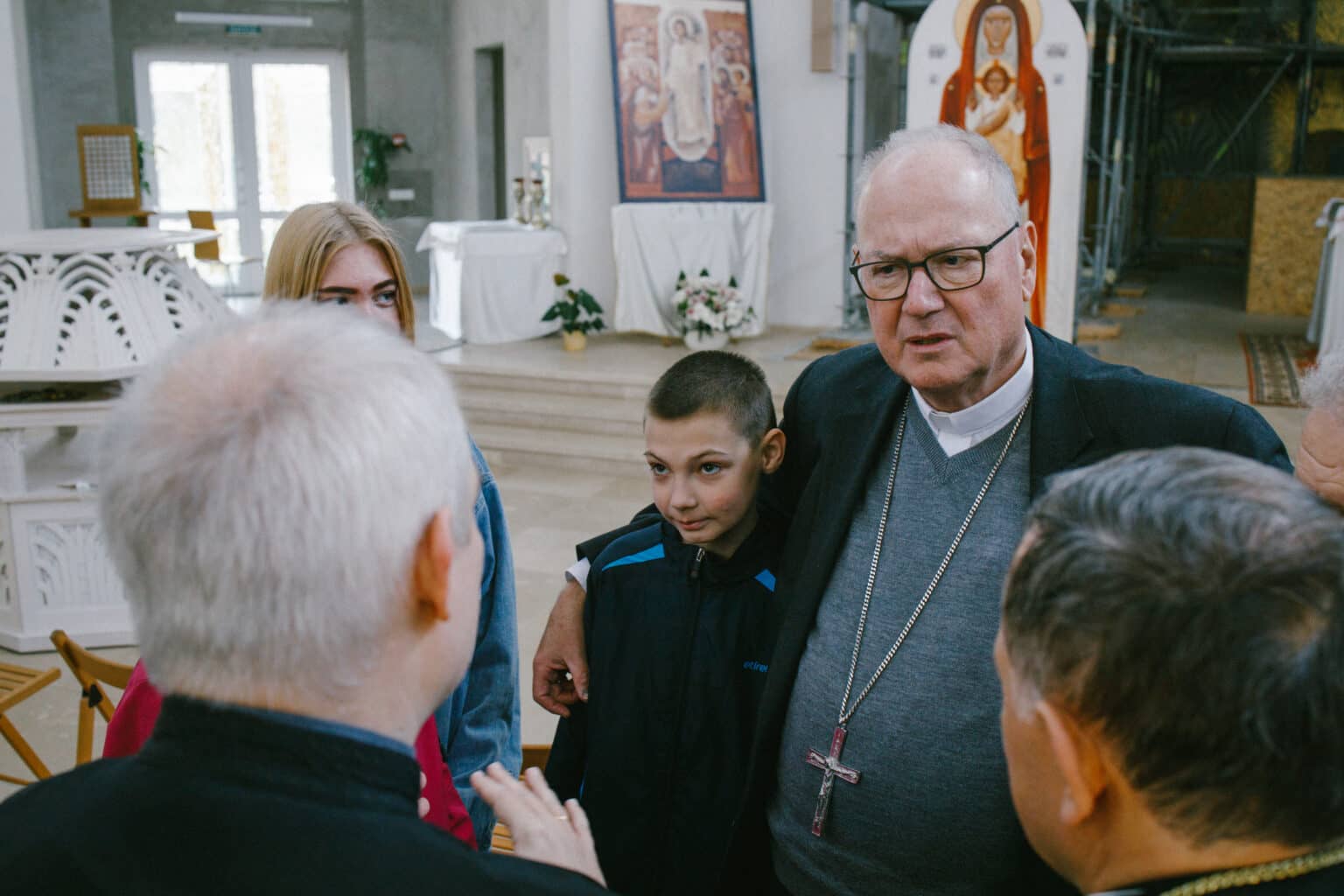 “We, Ukrainians, believe that during the Russian-Ukrainian war, even churches fell victim to distorted or incomplete information. Nevertheless, we have high hopes for the Church because she can and should be an effective remedy for this disease, taking a strong position on the side of truth. Because real dialogue is possible only in truth – for the sake of truth, not at the expense of truth. If such a dialogue obscures the truth, it will be meaningless. That is why true reconciliation is possible only in truth,” Myroslav Marynovych stressed.

The vice-rector also noted that there are many misunderstandings between the Vatican and Ukrainians now. The desperate appeals of Ukrainians are sometimes misunderstood, and the Vatican’s symbolic gestures are misinterpreted. “However, there is an easy way to cure any communication crisis – you just need to multiply communication channels to tell the truth. Please help us with this,” the human rights activist called. 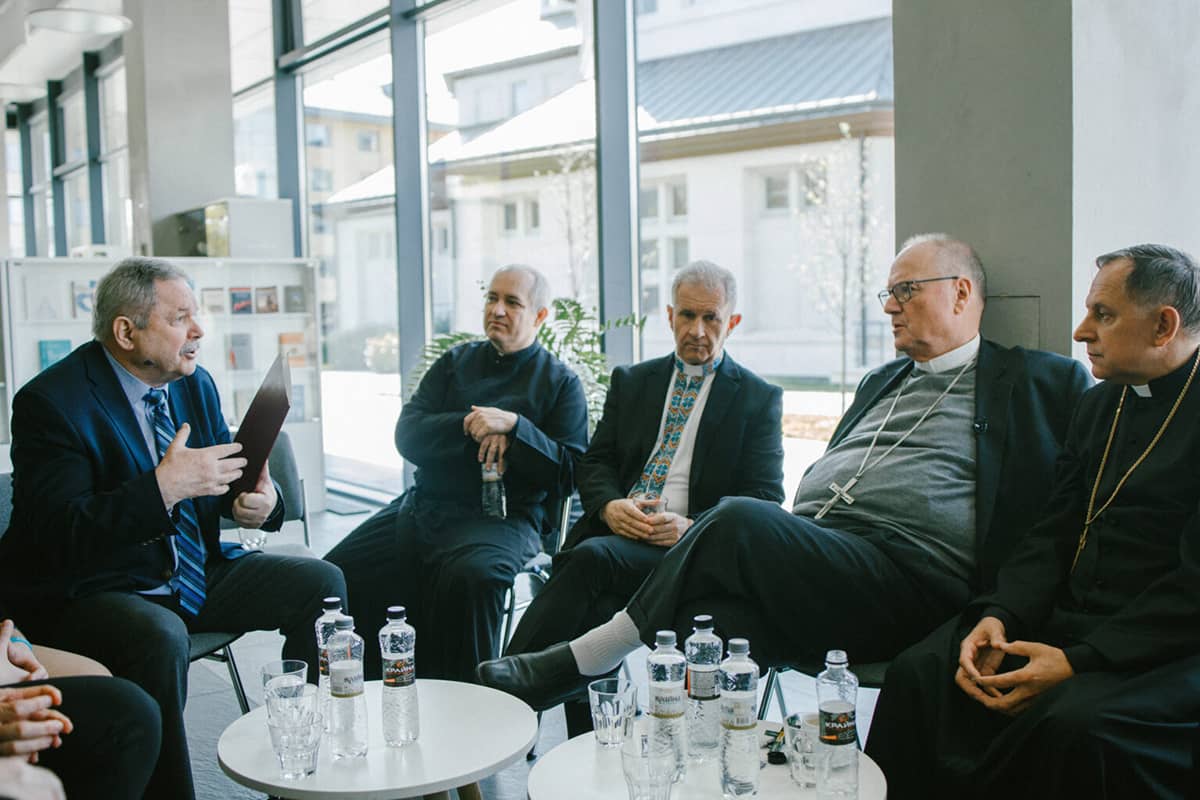 Finally, the leaders of the Ukrainian Catholic University thanked the Cardinal and the faithful of the New York Archdiocese for the material and spiritual support of Ukrainians. Also, through Cardinal Dolan, other clergymen were invited to come on a pilgrimage to Ukraine and see for themselves everything that is happening here.

Cardinal Timothy Dolan received “a thermal can” as a gift from the UCU community. These are special “heaters” that UCU students have been making together with the Lviv Candle Manufactory for our military since the beginning of the war, so that they can keep warm at the front. 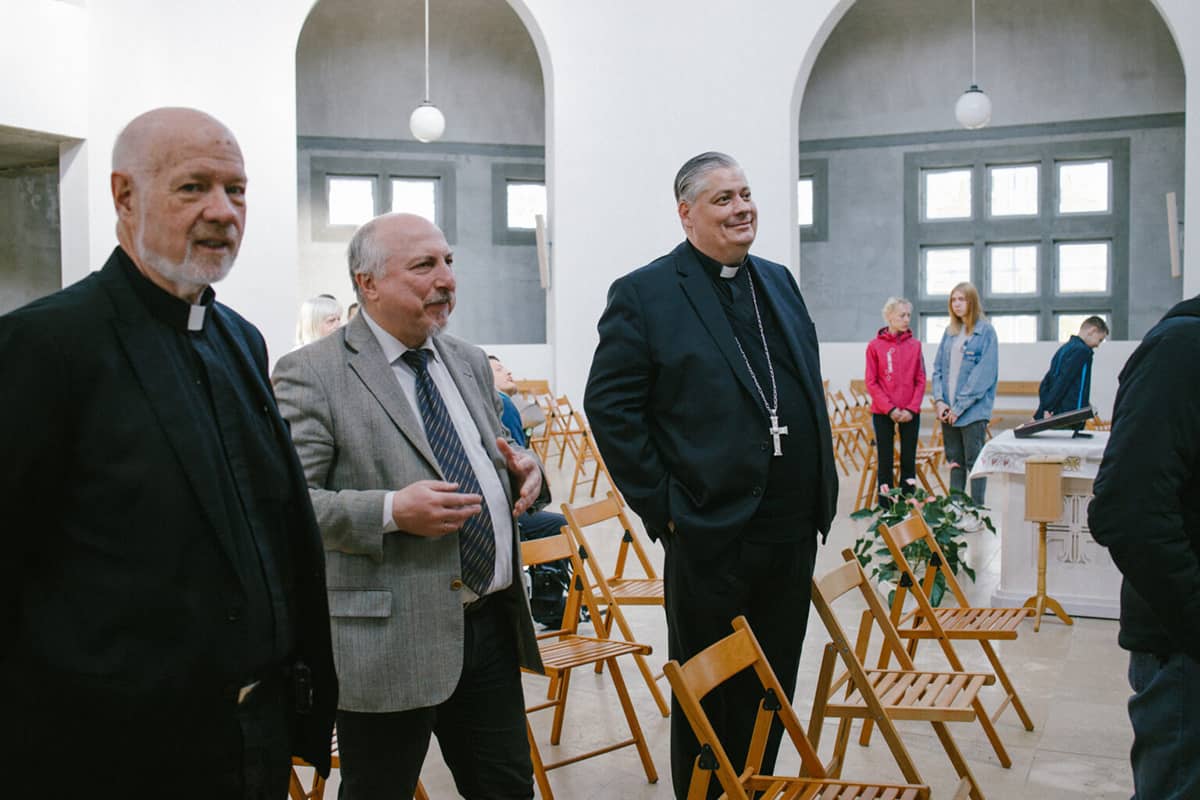 Cardinal Dolan also received an English-language historical album “Persecuted for the Truth” as a gift.

It should be added that Cardinal Timothy Dolan, who is the chairman of the CNEWA (Catholic Near East Welfare Association), also visited Poland and Slovakia, where he met with Ukrainians who were forced to flee due to a full-scale war waged by Russia against Ukraine. To date, CNEWA has allocated almost $ 2 million to support the Ukrainian refugees. 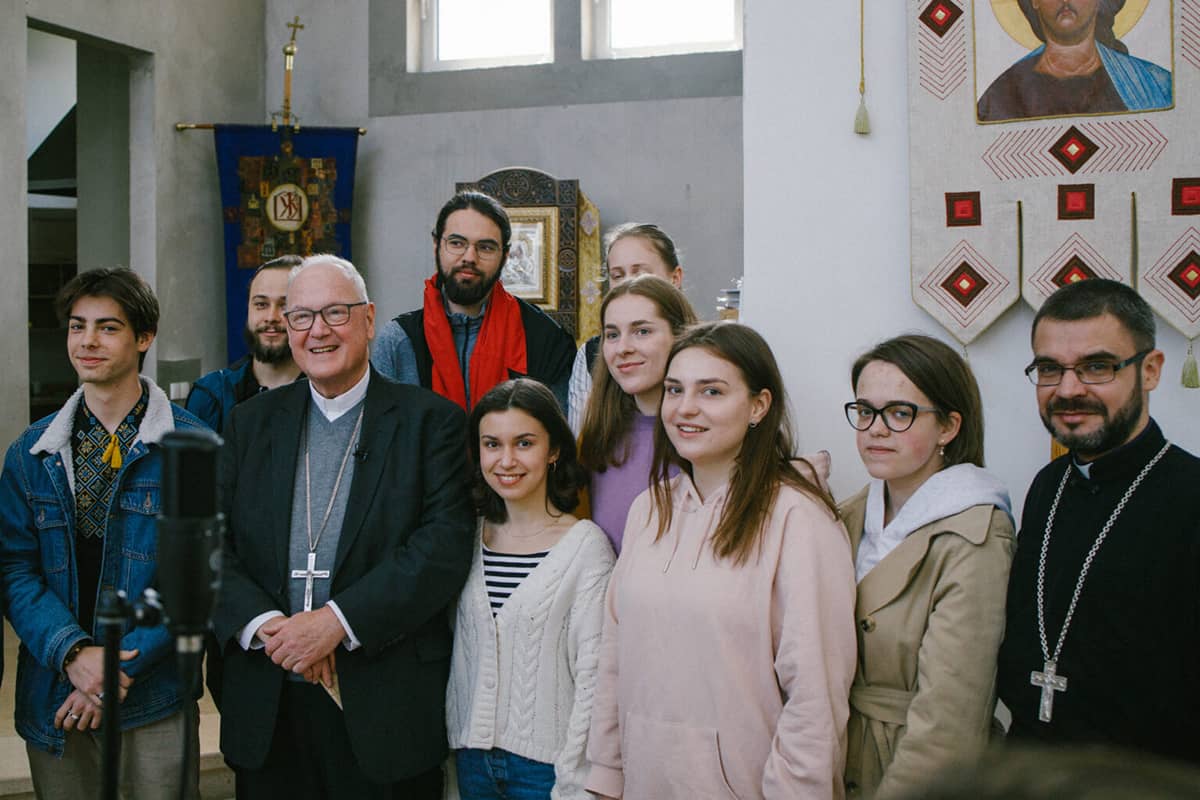 Cardinal Timothy Dolan with the student choir and head of the deanery of pastoral life Fr. Nazar Mysyakovskу

Cardinal Timothy Dolan, archbishop of New York and chair of Catholic Near East Welfare Association (CNEWA), has visited Poland and Slovakia to meet with Ukrainians fleeing the Russian military invasion of their homeland. The purpose of the visit is fourfold:

The purpose of the visit is fourfold:

1. Demonstrate solidarity with the people displaced by a military onslaught that has targeted not only military installations and infrastructure but civilians: their villages, homes, churches, places of refuge, even hospitals. The delegation visited the displaced persons in receiving centers along the Polish and Slovak borders with Ukraine, as well as in Krakow and Warsaw.

2. Show gratitude and solidarity with the caregivers — the priests, sisters and laity who have generously responded in meeting the needs of those in flight. The cardinal’s visit will highlight the Catholic Church’s numerous initiatives in providing refugees, regardless of creed, with shelter, clothing, food, medical care, counseling and safety. To date, CNEWA has rushed nearly $2 million in emergency aid to support these efforts in Ukraine, Georgia, Hungary, Moldova, Poland, Romania and Slovakia.

3. Express support for the leadership of the local churches. The delegation will meet with the leaders of the Greek Catholic and Latin churches, who have spearheaded many of these initiatives, and gather for prayers and silence with other church leaders.

4. Assert the Christian commitment to support all those devastated by the evils of war, and to raise awareness of the human cost for this unprovoked aggression.