Earlier this week Rev. Borys Gudziak, Archbishop-Metropolitan and President of Ukrainian Catholic University, shared this opinion article in USA Today. We share this moving Holy Week message with you in its entirety. This Easter, we pray for all those who are suffering in this unjust war, and those who defend Ukraine bravely. We will defeat evil with good and will stand with Ukraine, now and in the future. May the miracle of our Savior’s Resurrection give us all strength during this difficult time. Christ is Risen! Христос Воскрес!

We can bring healing amid war in Ukraine, even as genocides past and present haunt us 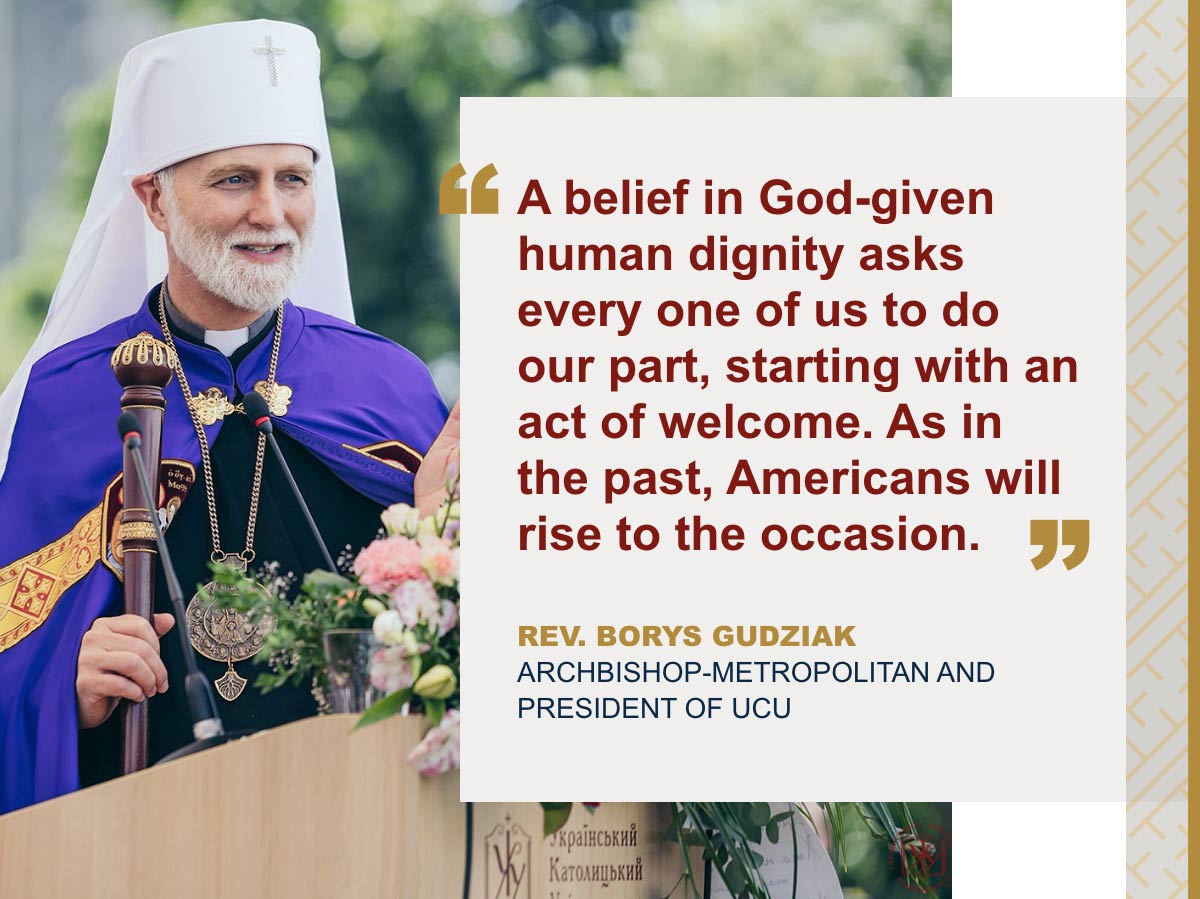 The mass atrocities in Bucha vividly demonstrate a method of war conducted through murder. The crimes of the Russian invaders are already being compared with the craven cruelty of the Islamic State group. The scenes of brutality have broken our hearts and left many feeling helpless in the face of evil.

During Holy Week, Christians will be contemplating the great mystery of evil as reflected in mass graves, drawing hope from the empty tomb of Easter. Besides prayer, can we somehow contribute to the righting of these wrongs?

There is at least one thing all people of goodwill can do to bring healing in the midst of horror: We can welcome displaced Ukrainians and offer them safe haven.

I have witnessed this transforming compassion in the life of my family. Like millions of Americans, I am the son of refugees. My parents met at St. George’s Church on the lower east side of Manhattan in 1950. As 18-year-olds, they left Ukraine in 1944 as Nazi and Soviet invasions ravaged their homeland forever changing their hometowns. They arrived in America in 1949 and 1950 after years as refugees in Austria and Germany.

My father escaped alone. My mother’s parents left with two teenage daughters. My grandmother died at 45 in a camp in Austria in 1944. A third daughter who joined the Ukrainian resistance movement was killed by the Soviets in 1945 before the war ended.

Refugees flee, not to improve their lives, but to save them.

The last living representative of that quest for safety is my 93-year-old Aunt Stephanie, who lives in Queens. I have visited her regularly since I returned to the U.S. after 32 years of service in Europe. She is housebound and feeble. Throughout her life, she was a worker, not a complainer.

Now, when I visit, she recounts the terror of childhood – at 10, during the first Soviet occupation of western Ukraine, she was scarred by surrounding arrests, deportations and mass executions; at 12, she carried pails of water to help relatives wash and recognize the decomposing bodies piled up in torture chambers. Among the 6.8 million inhabitants of Ukrainian lands killed during World War II were 1.5 million Jewish victims, including Stephanie’s neighbors and classmates.

These stories of genocide, separation and exile still haunt Aunt Stephanie. Because they are happening in Ukraine today to people who became my family through my ministry there, they continue to haunt me.

Without aid, millions would be doomed

How long the Russian invasion in Ukraine will last cannot be foreseen. Thousands of combatants and civilians are killed daily. Already, 4 million refugees and 7 million internally displaced persons are marked by the trauma of leaving home to escape violence. Since about 90% are women and children, the recurring nightmares will include separation from husbands and fathers.

Another 12 million are home in Ukraine but helpless. Many lack food, electricity or clean water. Without humanitarian aid and spiritual support, they are doomed.

In the midst of suffering, however, has come moral clarity. Billions have seen not just a violation of sovereignty, but crimes against humanity. They have decided who is just and joined communal efforts to help.

There are heroic signs of fellowship in Ukraine, where citizens in the western part have embraced, housed and fed the IDPs from the east. In inspiring solidarity, Poland has already hosted 2.5 million refugees, Romania has hosted more than 600,000, and small countries Americans struggle to find on a map – Slovakia, Hungary and Moldova – together accepted more than 1 million. Other European countries and citizens have opened their borders and homes, too.

The United States made its first policy step to welcome 100,000 Ukrainians and others seeking refuge. I know the U.S. will embrace them. For the past month, our chancery has received countless calls from Americans ready to house and sustain those in need. We and other leaders in the Ukrainian-American community have joined the U.S. resettlement coalition Welcome.US. Together we are ready to mobilize at least 100,000 Americans to host, sponsor and support Ukrainians seeking refuge here.

Most displaced Ukrainians fervently want to return home. They call their husbands and fathers, grandparents and neighbors to confirm they are still alive. They are glued to the news and social media to see if their houses in Irpin, Bucha, Mariupol, Chernihiv and Kharkiv still stand. They want to rebuild what was destroyed. The valiant defenders of the innocent manifesting the greatest love, sacrificing one’s life for one’s friends (John 15:13) are doing everything to make this possible.

Welcoming displaced Ukrainians and providing them refuge requires the common effort of the global community. Ukraine needs assistance in reestablishing its sovereignty, territorial integrity and peace.

A belief in God-given human dignity asks every one of us to do our part, starting with an act of welcome. As in the past, Americans will rise to the occasion. Aunt Stephanie is a witness to the transforming compassion of this country then and, I hope, now.