On Simon’s Pillars, the student theater group of the Ukrainian Catholic University (UCU), and the Slupsk Cultural Center in Poland took part in a Polish-Ukrainian youth exchange program and executed the project “Two voices in one thing, vertep and jaselka,” sharing Christmas traditions of the two countries. Though originally planned to include trips to the two countries, the program was modified to an online format.

The program was planned to include participants from Poland travelling to Ukraine for a week, getting acquainted with Lviv, the country, and the life of UCU. And the Ukrainians were to travel to Poland. They were to conduct master-classes and perform traditional Christmas plays, “vertep” in Ukrainian and “jaselka” in Poland. UCU staff member Dmytro Nakonechnyi, one of the organizers of the project, said the project was to have been a cultural exchange in search of common points of cooperation. New conditions, however, dictated new challenges, so the project went online, with the help of technology.

Yevhen Khudzyk, who has been director of On Simon’s Pillars for four years, since its creation, noted that most of the participants are students, though teachers and staff also take part. Khudzyk said Christocentrism is key for the group, so the Christmas theme of the project was very appealing.

They presented an ancient vertep from the village of Sokyryntsi in northern Ukraine’s Chernihiv Region. It was a puppet play with a three-story nativity scene built by Kyiv artist Bohdan Polishchuk.

UCU graduate Vira Hanchar, who has been involved with the UCU theater for three years, particularly enjoyed singing “traditional Christmas carols from various regions of Ukraine.” 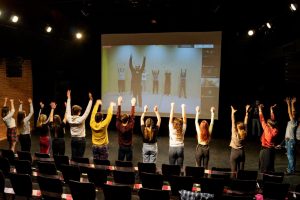 Fourth-year UCU philology student Natalia Bilska noted that “the lack of direct interaction was a minus. Preparing training sessions and taking part in the ones prepared by our Polish neighbors was difficult, because live presence is a very important factor…But the fact that you can communicate in this way somehow and continue to develop is also a plus.”

Regardless of the quarantine, the organizers managed to conduct 10 videoconferences, which included excursions, cultural meetings, master-classes, and theatrical performances. And there is still a hope that, eventually, they will be able to give live performances of what they prepared online.