Our mission is to be together and to give hope: Kyiv Friends of UCU donate more than 20 million hryvnias to support the university

By Matthew Matuszak|2022-12-15T11:22:05-05:00December 15th, 2022|News, UCU News, Ukrainian invasion|Comments Off on Our mission is to be together and to give hope: Kyiv Friends of UCU donate more than 20 million hryvnias to support the university

Guests of the Charitable Evening in Support of Ukrainian Catholic University, which was held on 3 December in Kyiv, donated more than 20 million hryvnias. The benefactors established scholarships for students and stipends for professors. They also support the UCU Volunteer Center in the conditions of a full-scale war and support the scholarship fund in memory of the slain Heroes Artem Dymyd and Oleh Vorobyov. 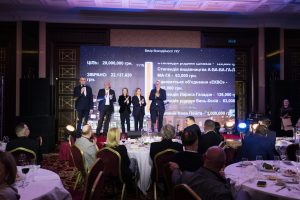 The 15th jubilee of the charitable evening in the capital united old friends and benefactors of the university, who donated money for UCU’s development.

Addressing attendees, UCU Rector Fr. Bohdan Prach stated: “Ukrainian Catholic University, like everyone now, is going through this full-scale war with some difficulty. But, on the other side, we hope to go through this experience and conceptualization together, to give hope, to do everything to the maximum to be ‘soldiers’ on our own fronts. UCU has managed to maintain a live academic process and support the team. And today this is a great achievement. Our mission is to be together, to educate, to love one another, and to give one another hope. I thank you for supporting UCU. I thank you for believing in us.”

The event began with an intellectual discussion “Keys to the Transformation of Ukraine.” Among those speaking were: Myroslav Marynovych, UCU Vice-Rector for University Mission; Roman Kechur, psychiatrist, Head of the UCU Department of Psychology and Psychotherapy; Kateryna Zagoriy, co-founder of the Zagoriy Foundation and UCU senator; Yaroslav Hrytsak, historian, UCU professor; and Sophia Opatska, UCU’s Vice-Rector for Strategic Development and founding dean of the UCU Business School. What does Ukraine’s victory mean for each of us and what are the keys for transforming Ukraine? These questions were discussed. You can watch a full recording of the discussion HERE 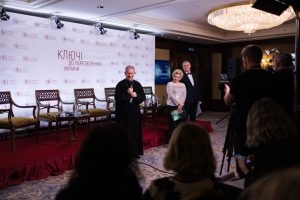 Kateryna Zagoriy stated: “Victory for me is paying reparations. This will mean that everyone has punished Russia for what it is doing. Facing great challenges in this war, we understand that institutions are not working today. Individual people are working. Now each person must choose what he or she knows how to do best and get to work! Get up and do it, let’s all turn our attention ‘where the current is now flowing.’ At the same time, it’s important for us not to turn from a country with eyes on fire into a government institution which does not work. Each person now has to do his or her own work, and more!” 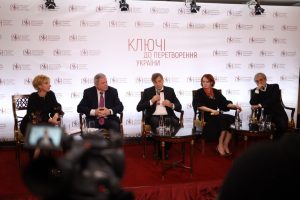 Participants in the discussion “Keys to the Transformation of Ukraine”

Myroslav Marynovych, UCU Vice-Rector for University Mission, considers that Ukrainians have already achieved a very important element of victory, because they believe in it: “If we return to the boundaries of 1991, but we ourselves have not changed, this will be our defeat. We also need to change. The blood of today’s victims of war should become the seed of a new Ukraine, which will be sure of itself, take responsibility for itself, and enter the community of democratic nations with an important element.”

After the discussion, the guests were invited to take part in the traditional charitable lottery and auction

Metropolitan Borys Gudziak, UCU President, addressed the Kyiv Friends of UCU from the USA and thanked them for supporting the university: “Victory can only be in truth, and truth demands justice. For the sake of this justice, Ukrainians are making a great sacrifice. But they are changing history, changing the world. You and I have no doubt that God’s truth will win. I think you for witness, solidarity, and certainty that we will get through this trial and become worthy members of a new Europe, where we are already not beggars but providers of content, style, and truth. Now this UCU community, which you so generously support, is providing new meaning, style, and witness.”

The emcee of the charitable evening was a Ukrainian actress of stage and screen, producer and civic activist Irma Vitovska and the head of UCU’s Development Department, Andriy Kurochka. The evening’s incredible musical atmosphere was created by KRUT, a Ukrainian singer and the first bandura player in the world of soul, whose incredible voice was heard in unique combination with a folk instrument, the bandura. 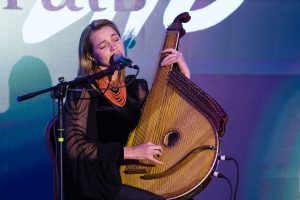 Ukrainian singer and the first bandura player in the world of soul, KRUT

We asked our benefactors: “Why is it important to support education in wartime?”

“All our efforts now are focused on helping our soldiers. But we can’t live only for today. It’s necessary to think about tomorrow. Education is the most important thing that can ensure our future. I have now supported UCU for many years, so that this university will flourish, so that these traditions and values embodied in the university will spread through all Ukraine.” Iryna Ivanchyk, co-founder of the Believe in Yourself Foundation. 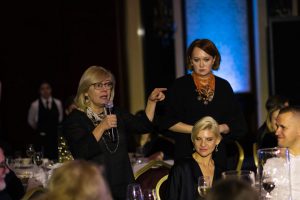 “Investments and help for education is our contribution to the future. The Nova Poshta team has an enormous budget to help the Armed Forces of Ukraine, charitable funds and volunteers. But it’s necessary to find an opportunity to help those who are contributing to our victory today and will lay the foundation for our future. This is why we support UCU.” Vyacheslav Klymov, co-founder of Nova Poshta. 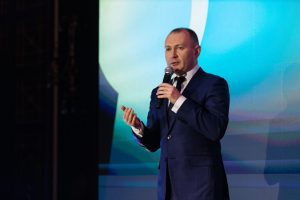 Vyacheslav Klymov, co-founder of Nova Poshta at the charitable evening in support of UCU

“We are losing artists, scholars, volunteers, civic activists, politicians, soldiers, and police. A country cannot lose so much. So we need to prepare a new generation. Ukrainian Catholic University provides an example of how the elite is formed today.” Irma Vitovska, Ukrainian actress of stage and screen, producer, civic activist. 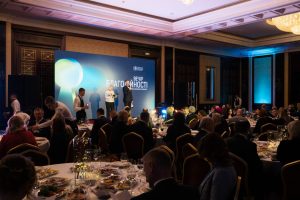 The biggest donations during the Charitable Evening in Support of Ukrainian Catholic University came from: 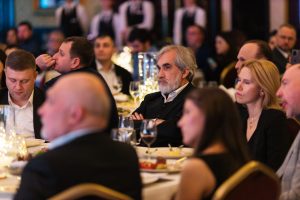 At the silent auction, five lots were presented: 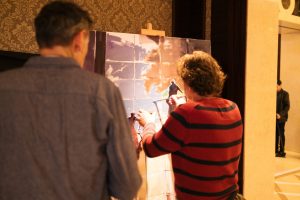 During the silent auction, 30 artistic lots were presented. The favorites of the auction were artists: Petro Sypnyak, “Christmas Evening” and Roman Romanyshyn, “Etno UA”. 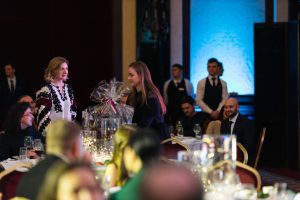 A lottery in support of UCU

Gifts for the charitable lottery were provided by six embassies in Ukraine: those of Spain, Switzerland, Croatia, the Czech Republic, Canada, and France. 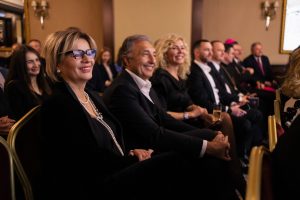