Overcoming fear and anguish with hope: how to cope with Putin’s aggression

Join Archbishop Borys Gudziak, a patron of the Ukrainian Institute London, to discuss the current sitiation in Ukraine, and how we can find hope and spiritual strength in these troubled times.

Global headlines focus on the possible imminent full-scale invasion of Ukraine but the overt threat of Russian aggression is only the latest step in an eight-year war. Since 2014, Ukrainians and those who care about the country throughout the world have lived in a heightened state of anxiety, as fighting in the east has claimed thousands of lives, left many families grieving, and caused physical and emotional trauma for individuals, communities and the nation. The new threat of escalation by the Kremlin now perpetuates this uncertainty and fear, attempting to throw Ukraine and much of the world into a constant state of panic. 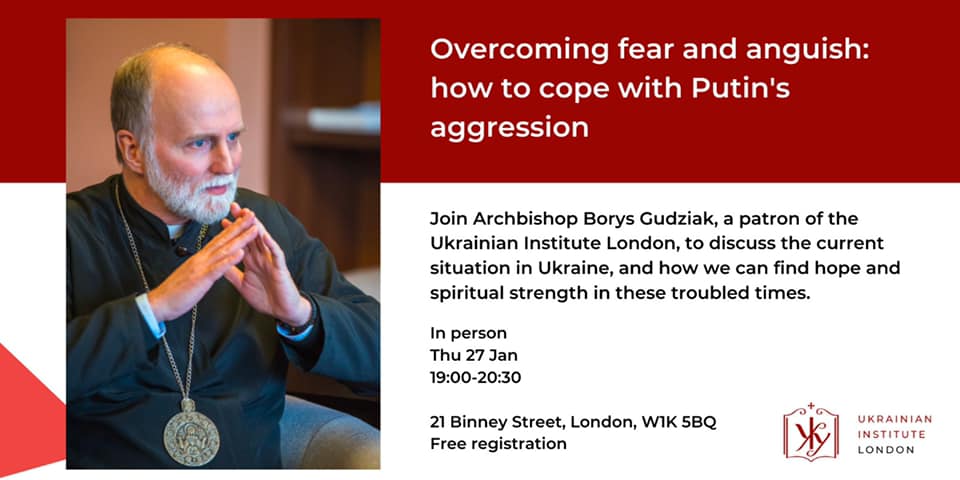 Whilst many have responded to the challenges with bravery, resilience and preparation for the worst, the anguish fuelled by the tensions of recent months can be difficult to bear.

Join Archbishop Borys Gudziak, a patron of the Ukrainian Institute London, to discuss the current situation in Ukraine, and how we can find hope and spiritual strength in these troubled times.