Rooms Named in Memory of Prof. A. Kniazynsky and O. Turczyn Blessed at UCU with Relatives Participating

Dr. Wilfried and Mrs. Maria Voge, benefactors of the Ukrainian Catholic University (UCU) and UCEF from California, took part in a ceremony dedicating auditoriums 204 and 304 of UCU’s Metropolitan Andrey Sheptytsky Center. The Voges shared their memories of their relatives, Prof. Antin Kniazynsky and Orest Turczyn, in whose memory they and their family, Mrs. Oksana Kozbur and the late Mrs. Martha Turczyn, made donations for UCU’s development. Participating in the dedication were the guests, UCU staff, and university clergy, in particular Rector Fr. Bohdan Prach. 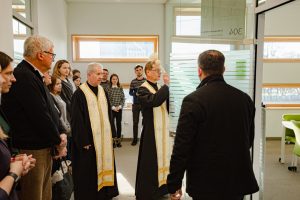 Dr. Voge recalled his first visit to Ukraine in the ’90s, when there was no building on the UCU site. Now there is an active academic life, students reside in a modern, comfortable dormitory and study in UCU’s new buildings. 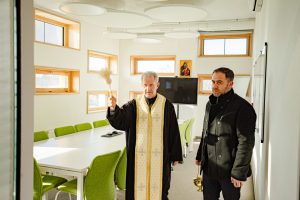 The Kozburs, Turczyns, and Voges are connected with UCU and Ukraine for a number of reasons. Antin Kniazynsky, Mrs. Voge’s grandfather, was born in 1893 in the Boyko region in a priestly family. He was a talented expert in literary studies, an educational and civic activist. In his youth, he fought together with the Sich Riflemen and then completed his doctoral studies at Lviv University, researching Boyko folklore and teaching in high schools of Yavoriv, Drohobych, Ternopil, and Sambir. He was actively involved in Ukrainian culture and civic life.

Mrs. Voge, recounted: «He was a professor very revered by his students. I think for that reason the Communist Party didn’t like him too much, because he had too much influence on other young people. He spent 10 years in a concentration camp in Siberia. He was released, I think, because they believed he was a citizen of Austria. He was able to return to Munich and then he came to Philadelphia. He was weak, somewhat crippled, he couldn’t walk very well. He wrote a book about his experiences, ‘In a Captive Country.’ We’re getting it translated into English right now.» 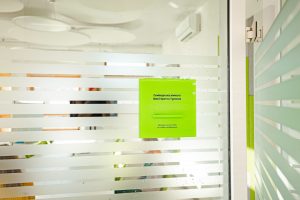 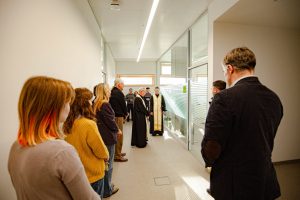 Kniazhinsky had twin daughters, Martha and Oksana: the latter, together with her husband, architect Taras Kozbur, were one of UCU’s first benefactors. The late Mr. Kozbur was head of the Patriarchal Society in Los Angeles and respected in the community. In the words of his daughter, Mrs. Voge, the couple from the very beginning believed in the university and its mission. Mrs. Turczyn’s son, Orest, shared this enthusiasm. He belonged to the Ukrainian community in Philadelphia and was an active member of Plast. He was lost tragically a few years ago in a car accident.

The two sisters, Oksana Kozbur and the late Martha Turczyn, were particularly glad to join the circle of the university’s leading benefactors and name two seminar rooms at the Metropolitan Sheptytsky Center in bright memory of their father, Prof. Kniazynsky, and Orest Turczyn. With their sacrificial gift, they demonstrate how important for their family was the formation of youth on principles of Christian values, love of their nation, and civic responsibility, which UCU does with dedication. 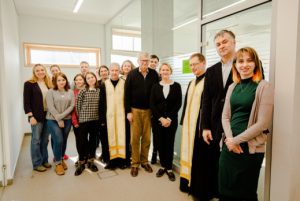 And Dr. Voge has also been a friend of UCU for many years. He worked for 19 years at the IT company SoftServe, which he represented in the state of California. When he visited Kyiv Polytechnic Institute and Lviv National University in the ’90s, Dr. Voge helped introduce student internship programs and employment opportunities at various companies, including Apple and Intel. He is a friend of UCU Vice-Rector Myroslav Marynovych, who visited the family in the USA, and of Andrew Sorokowski, who has taught at UCU. 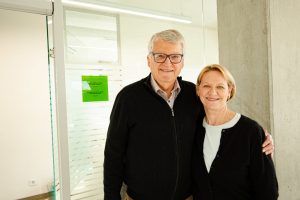 It is interesting that the Voges are not Catholics but Mormons. However, these communities, according to the guests, work together in the USA. In particular, both try to support humanitarian projects and initatives throughout the world. «Why are we now at UCU and why do we support it? Because we believe that religion is very important in the educational process,» the benefactors explain. 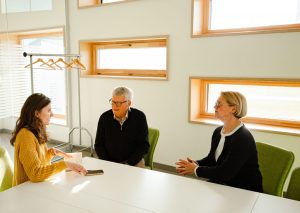 Dr. Voge adds: «We take our support of UCU very seriously. I am a German without a Ukrainian background, but I think that this country has wonderful potential: comparing it in 1991 and now, we are talking about two totally different countries. A number of people here don’t notice this but, having returned after many years, I notice great changes. These changes should now find their place in human hearts. It is institutions like UCU that will facilitate this process of re-conceptualization.» 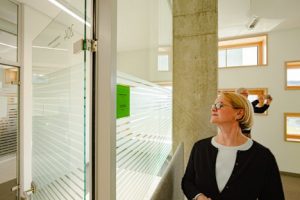 Mrs. Voge gives her vision of UCU: «We are happy for any opportunity to support such an important effort. The support of benefactors helps this university and the creation of a positive atmosphere beyond its boundaries, because it influences the general population of this country. I think that, the more people see the results of such cooperation, the more serious changes in the country will become possible. We pray and believe that this will happen.»