“If somebody wants to make a difference in the world and if they cannot cure cancer, Ukrainian Catholic University is the next best place,” Miceál O’Hurley, co-founder of the Oksana Shadrina-O’Hurley Scholarship, states with enthusiasm. He and his wife, Oksana, established the scholarship to support a UCU student. Actually, it was his birthday gift to his wife and a way to pay tribute to Oksana’s late parents, Volodymyr and Olga. “Both of her parents were people of faith in times when faith was persecuted. As a wedding present, her mother gave us an icon.”

Miceál, Oksana, and their two children, Lorcán Volodymyr and Bláithnaid Saoirse, live in Youghal near Cork in Ireland. They are owners of the small artisan ice cream cafe Fantastic Flavours Ice Cream Parlour. Making ice cream was Miceál’s long-time hobby while he was doing his daily jobs in public service. After retirement and the economic downturn, he decided to turn a hobby into a business. “Ice cream sales had always grown, even if economies were down, even during the Great Depression. It is a comfort food, something that family can do together, relatively cheaply,” he says. Just before the lockdown, the family was to open several stores in the United States, but COVID-19 happened. Luckily, they have not signed the lease. “God must be looking after us,” says Miceál. They plan to expand into the US now that the pandemic is subsiding.

Around that time, at the dawn of the pandemic, despite unstable and fragile financial conditions as they were forced to temporarily close their cafe, the couple decided to support the Ukrainian Catholic University, establishing an annual scholarship via monthly payments. “We both know that education is a fundamental key, so when we had an opportunity, we decided to create a scholarship so that some young Ukrainian might have an opportunity to get an education in a good university, with a Catholic ethos that otherwise they would not be able to get.”

The couple is strongly involved in charitable work — they participate in charitable events and donate money to various causes. “We give a lot to charities, although we are not wealthy people at all. It has always been a part of our ethos to be generous. When we finished our previous charitable obligation, UCU became our new priority, and over time it will become our focus.” 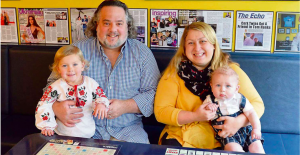 The 2020 Recipient of the Oksana Shadrina-O’Hurley Scholarship is Julia Lebedynska. She is a 1st-year MA student in the Clinical Psychology program.

“Scholarships are a huge motivation. Apart from the actual possibility to study, scholarships give students an understanding that they are part of a community that roots for them and inspires them to strive for excellence,” comments Julia. She believes that it’s an amazing experience to know the scholarship sponsor in person. Julia and the O’Hurley family shared a few Zoom calls. “It’s very inspiring to listen to their story and why they think they could do more by believing in me. For example, my contributor is personally interested in my major and it is inspiring to feel that you have a like-minded person who shares your values.”

Miceál strongly believes in supporting education, especially a Catholic one. “The value of education is incredible, it changes people’s lives. If we saved that money in a year, I might be driving a new car. But a new car is not going to change somebody’s life.”

The Oksana Shadrina-O’Hurley Scholarship is a part of a big tradition of generosity from the people from Ukraine, Western Europe, US, and Canada. During the scholarship program, UCU engaged hundreds of sponsors who provided close to 2000 scholarships to students. The scholarship competition for prospective and existing students lasts through the spring semester. 270 prospective and 190 existing students applied for scholarships. As Dean of Student Affairs Ivanka Mohyliak commented, there are social scholarships for less privileged students and academic scholarships that recognize academic excellence. There are different models but those two criteria — need and academic results — are always taken into account.

After graduation, those students who received scholarships stay connected with the university and help their fellow students. For example, alumni of the UCU School of Journalism and Communication established their own scholarship.

“We may never meet that young woman in person, but we hope that we made some difference in her life, and in her turn she will make a difference in somebody else’s,” Miceál expresses his “pay it forward” principle.

It was fascinating to learn that Miceál’s involvement with Ukrainian Catholics started with friendship with the late Cardinal Lubomyr Husar, former head of the Ukrainian Greek-Catholic Church, back when he was still a priest. “My relationship with him over the years was personal and pastoral. We had mutual friends. He led a number of retreats. He taught me to love Ukraine at a time when most Americans looked at it as part of the Soviet Union.” 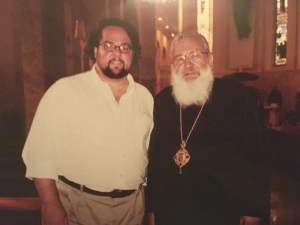 Miceál was with Lubomyr Husar when he was created cardinal in Rome and shared a brief sketch which characterises the late head of the Ukrainian Greek-Catholic Church. In Saint Peter’s Cathedral during the vesting before the Liturgy, he eyewitnessed how Patriarch Husar helped a little acolyte wear his vestments properly. “The boy was almost in tears, and Husar walked in so gently and taught him, as a father would teach a son, to tie his shoes. That was a man who was about to become a cardinal; a prince of the Church took time to take care of a little boy.”

“I loved the guy!”, summarizes Miceál. “He was the model of a good Christian.”

Miceál believes that the legacy of generosity should be passed on to his children. “I am of a strong opinion that children learn by watching their parents. And, if we want our children to develop an ethos of generosity, it’s important that they start it from their earliest days. When the collection plate is passed during the Mass, it is a teaching moment that they see we contribute. Even if we don’t have a lot, they see that generosity is demonstrated, not just talked about.”