The Miracle of Independence

It was a miracle we should never take for granted.

Today UCEF and our colleagues at the Ukrainian Catholic University rejoice in the 29th anniversary of Ukrainian Independence.  It was on August 24, 1991 that the Ukrainian Parliament proclaimed Ukraine’s independence from the Soviet Union.

Looking back to that day, we may be tempted to believe that the collapse of the Soviet Union was only a matter of time – a historical inevitability.

But there was nothing inevitable about that breathtaking moment.

As late as the 1980s, the USSR seemed too big to fall and too brutal to vanquish.

Consider the Orwellian year of 1984:  Scores of Ukrainian human rights activists were still imprisoned in the Soviet Gulag.  Among them was UCU’s beloved future Vice-Rector Myroslav Marynovych.  We were mourning the loss of the spiritual leader of the Ukrainian Catholic Church – Patriarch Josyf Slipyj who spent 18 years languishing in a Soviet prison camp.  Thousands more Ukrainian Catholics languished in the Underground, unable to practice their faith.

What was foreseeable to a precious few dreamers and visionaries seemed hopelessly naïve.  Yet the dream of Ukraine’s independence was the miracle that actually happened.  And that miracle has endured for 29 years.  Today we thank God for that amazing improbability.

The cofounders of the Ukrainian Catholic University always knew that Ukraine’s declaration of independence was just the beginning of a long, hard road of building a new society.  Even under pressure from the secret police they never succumbed to self-pity or despair.  Through the Orange Revolution and the Revolution of Dignity, UCU remained on the cutting edge of Ukraine’s reawakening – its ongoing struggle for human dignity, ethical social change and political and economic reform.

Today Ukraine’s sovereignty and its commitment to democracy are being tested as much as ever.  Vladimir Putin continues his brutal occupation of Crimea and his mindless aggression in the Donbas.

Yet the people of Ukraine have tasted freedom, and they are not about to surrender their freedom or their dignity without fierce resistance.  Since 1990, Ukrainians have carried out three non-violent revolutions that would have been the envy of Mahatma Gandhi and Martin Luther King, Jr.  When Russian troops and terrorists invaded the Donbas in 2014, armed resistance became unavoidable but Ukrainian fighters forced the invaders to give up most of their territorial gains.  What began as a rag-tag army of untrained volunteers in 2014 has grown to over 600,000 battle-hardened fighters and veterans. Putin’s evil master plan is now further complicated by hundreds of thousands of brave protestors in Belarus and Russia’s Far East that have drawn inspiration from Ukraine’s fight against tyranny.

And for all of Ukraine’s intractable problems, there is much to be proud of:  Ukraine has one of the most vibrant civil societies in all of Europe.  Over the past 10 years, Ukraine has spawned a growing middle class with many successful small businesses. We’re proud of UCU’s Lviv Business School and its Applied Science Program that have been on the cutting edge of this economic growth.  And UCU is proud of its role in generating a new spirit of philanthropy in Ukraine.  Even at the height of the coronavirus pandemic, local business leaders in Ukraine continue to provide generous support to UCU, raising $250,000 during the virtual “Perelaz” event in May.

Ukrainians have maintained a strong and respectful multicultural ethos and interfaith solidarity.  Even with one million internally displaced persons from Crimea and the Donbas, Ukraine has not experienced a refugee crisis because compassionate Christians have followed Jesus’ imperative to “love thy neighbor.”  They have embraced their Crimean Tatar countrymen and others that have been forced from their homes.  UCU alumni continue to create affordable housing and effective humanitarian programs for orphans and war victims through the Building Ukraine Together initiative.

As Ukrainians prepare to celebrate the 30th Anniversary of their independence next year, we should all give thanks for the progress Ukraine has made, and we should do everything in our power to advance the cause of freedom and justice for a nation that will continue to inspire the world. 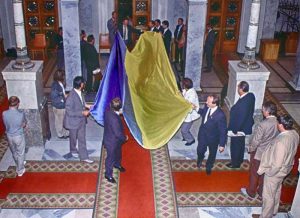