From the 28th of June to the 6th of July, at the historic Monastery of Holy Dormition in the village of Univ, UCU held its annual Theological Summer School, specially designed for the staff of the Ukrainian Catholic University.   Over the nine-day period 39 members of the University faculty and staff, lived, learned and found spiritual enrichment in the unique prayerful environment in the stillness of this ancient monastery hosted by the monks of the Studite Order.

The organizer of this seminar was the Theological/Philosophical faculty of UCU.  During the weeklong program, UCU professors were lodged in the guest suites of the monastery.  They had an opportunity to take part in the liturgical services of the Studite Monks – both daily liturgies and vespers – and they were able to engage in theological discussions with UCU faculty and invited guests. 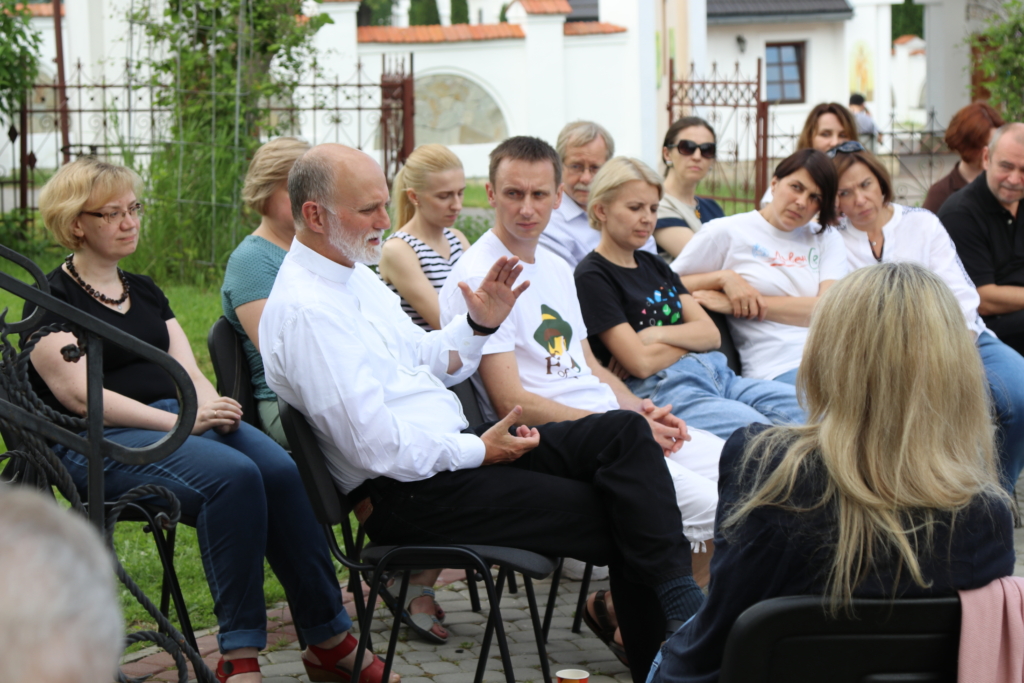 The Monastery of the Holy Dormition carries deep spiritual and historic significance for the Ukrainian Catholic Church.  Dating back to the 15th Century A.D. the Monastery withstood several assaults by foreign invaders.  During the Nazi Occupation of Ukraine in the 1940s, the monks at Univ provided refuge for Jewish children and helped to save them from the Holocaust.  One of the children harbored in Univ – Dr. Rouald Hoffman – later became an eminent scientist and professor at Cornell University.  He was the winner of the Nobel Prize in Chemistry in 1981.  During his Apostolic visit to Ukraine in 2001, St. John Paul II beatified the venerable Abbott of the Univ Monastery – Klymentiy (Clement) Sheptytsky, acknowledging his heroism in sheltering Jews during World War II.  Although he perished in a Soviet prison after the war, Abbott Klymentiy and several of his fellow monks are now recognized among the Righteous at the Yad Vashem in Jerusalem. 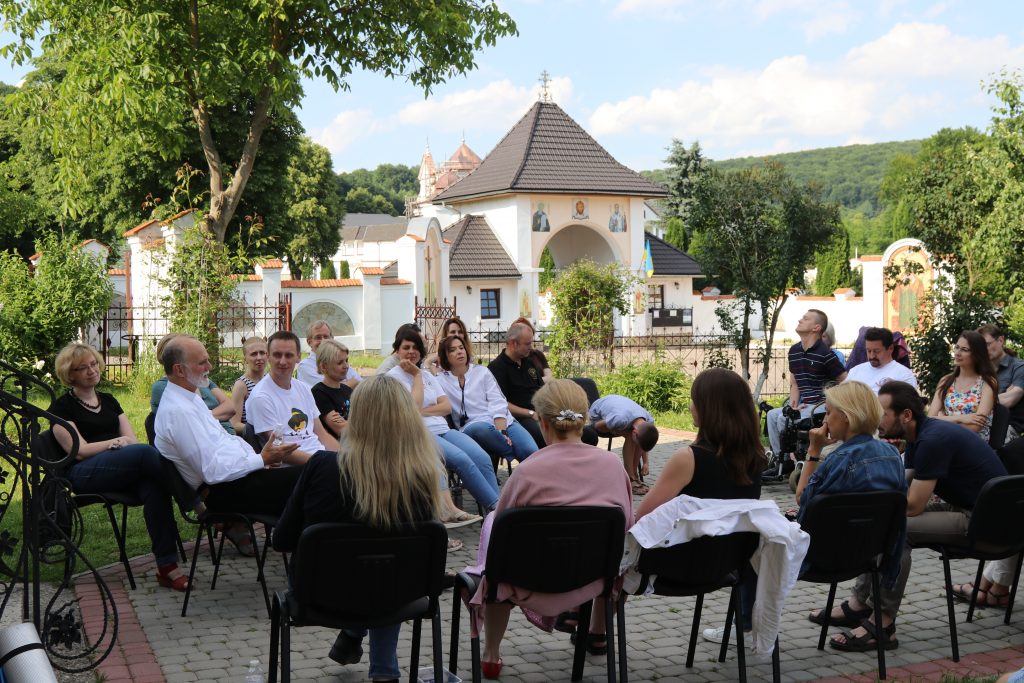 On the first day of the theology course, the special guest and featured speaker was the President of the Ukrainian Catholic University – the Very Reverend Borys Gudziak, the Metropolitan Archbishop of Philadelphia.  During this gathering, professors and staff spoke with the Archbishop about the evolution of the university and its community of scholars.  They also addressed some of the challenges that emerged as a result of the COVID pandemic.  At the conclusion of this first session, the Archbishop summarized some of the key issues raised: “In our community, it’s important to acknowledge our weaknesses, to be grateful, and to be able to say, ‘Forgive me….I’m sorry…’. Meetings such as this theological school – they’re really about fundamentals.  They enable us to build a healthy society.”

Overall, the curriculum for the theological course was comprised of three modules: 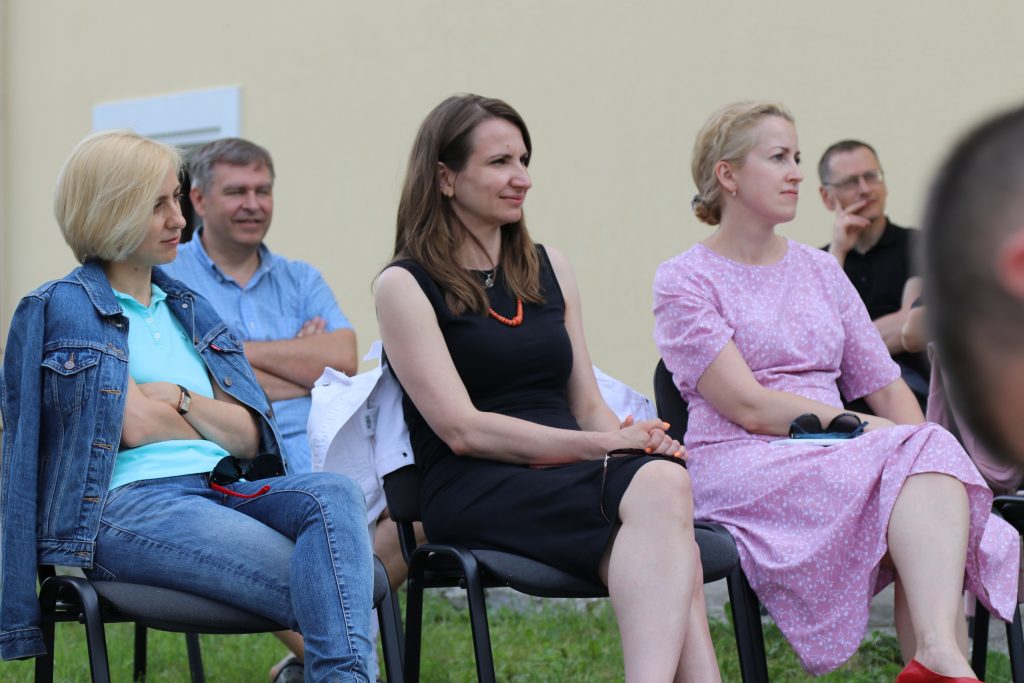 To explain the role of the icon in liturgical practice and personal prayer, lectures were offered by the Director of the Iconography School “Radruzh” at UCU – Solomiya Tymo and Professor of Iconography, Ulana Krekhovets. Following the lectures, each participant in the Summer School took part in a master class in the writing (painting) of an icon in the Hutsul Style on glass with an image of the Theotokos Odigitria (Hodegetria) – the most venerated icon of the Blessed Virgin Mary. 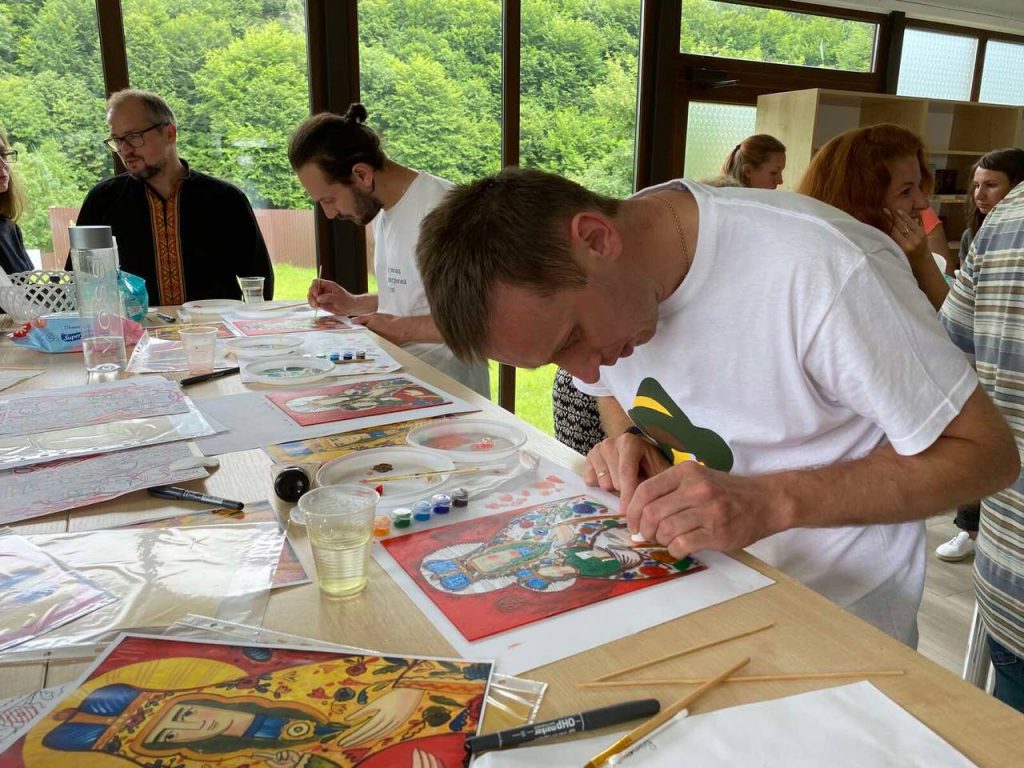 “Just as I labor over the icon, I am called to labor over the image of God within me,” said Professor Solomiya Tymo.  “This image is an expression of myself, as well as my imagination of God.  The one and the other remain in a constant dynamic state.  And I cannot stop the process of my development.  Because God gave us the possibility to either become more in His likeness, or to succumb to degradation.” 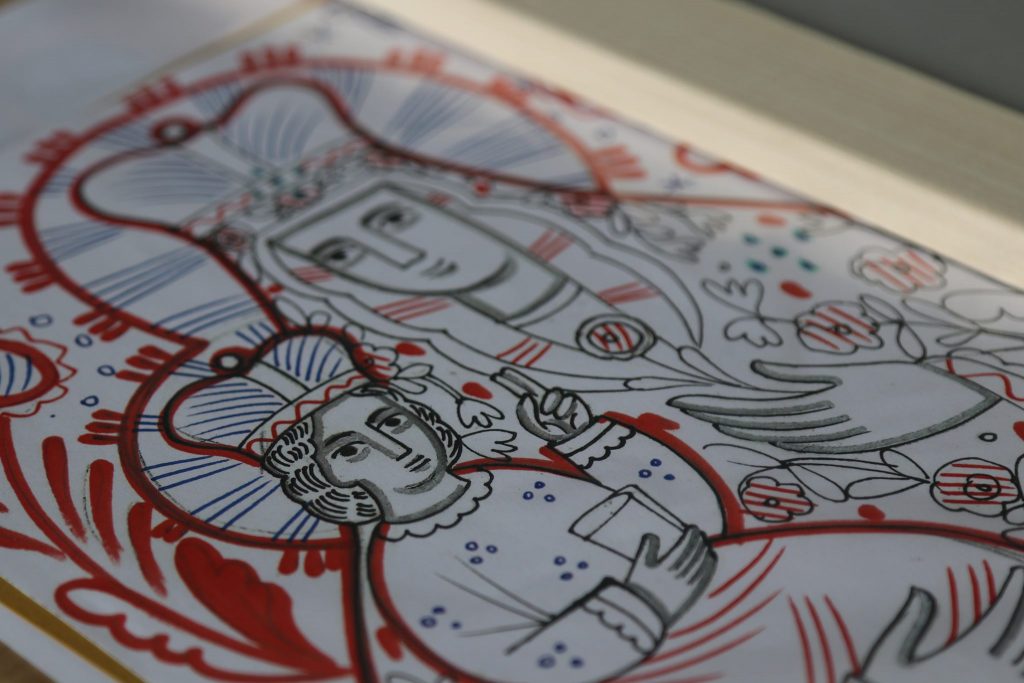 In addition to the lessons, the participants had the opportunity to reflect on the themes “Christianity today – Gifts and challenges” and “Why do we need liturgical services?”

Each day culminated in an evening meeting with an invited guest. First was UCU Rector Fr. Bohdan Prach, who emphasized the importance of community interaction and also answered questions about the development of the team, the university, and new challenges that motivate him in his work: “In order for our hard daily work to bear fruit for Ukraine, we have to live and work every day, and not only during revolutions. The intensity can’t subside: every day we have to increase our efforts. And the number of communities like this must increase,” the Rector of UCU stated. 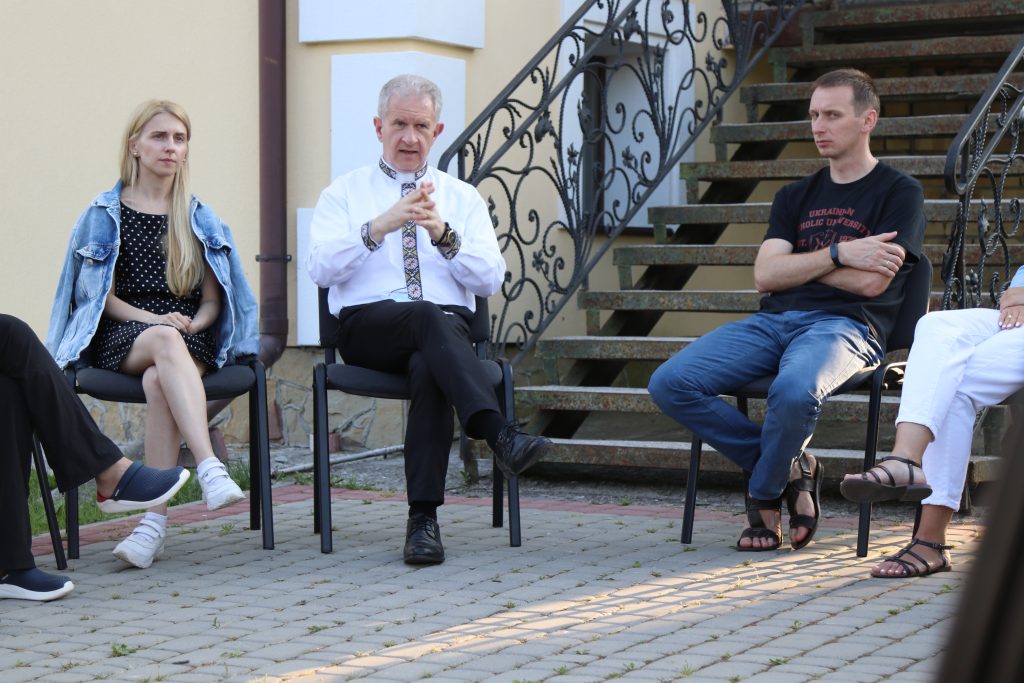 The next evening’s meeting was with the Director of the UCU Law School, the managing partner of KPLT Ukraine, Andriy Kostyuk, who spoke with the participants about freedom. “The most that God can give each human being is the possibility to create himself or herself (to build or to discard). We decide every day what this possibility means to us: Who are we? What is our purpose? Where are we going? This makes life interesting, exciting and frightening at the same time. The human being’s single freedom is to create or to ruin him- or herself,” emphasized Andriy Kostyuk.

Other guests of the evening meetings included: Fr. Yona Maksim, Doctor of Theology, Abbot of the Dormition Monastery in Univ of the Studite Order; Yuriy Pidlisnyi, Chair of UCU’s Bachelor’s Program in Ethics-Politics-Economics and head of the UGCC Commission on Matters of Family and the Laity; Taras Dobko, UCU’s Senior Vice-Rector; Myroslav Marynovych, dissident and human rights advocate, UCU Vice-Rector; and Oleh Yaskiv, UCU Vice-Rector and Director of the Metropolitan Andrey Sheptytsky Center. 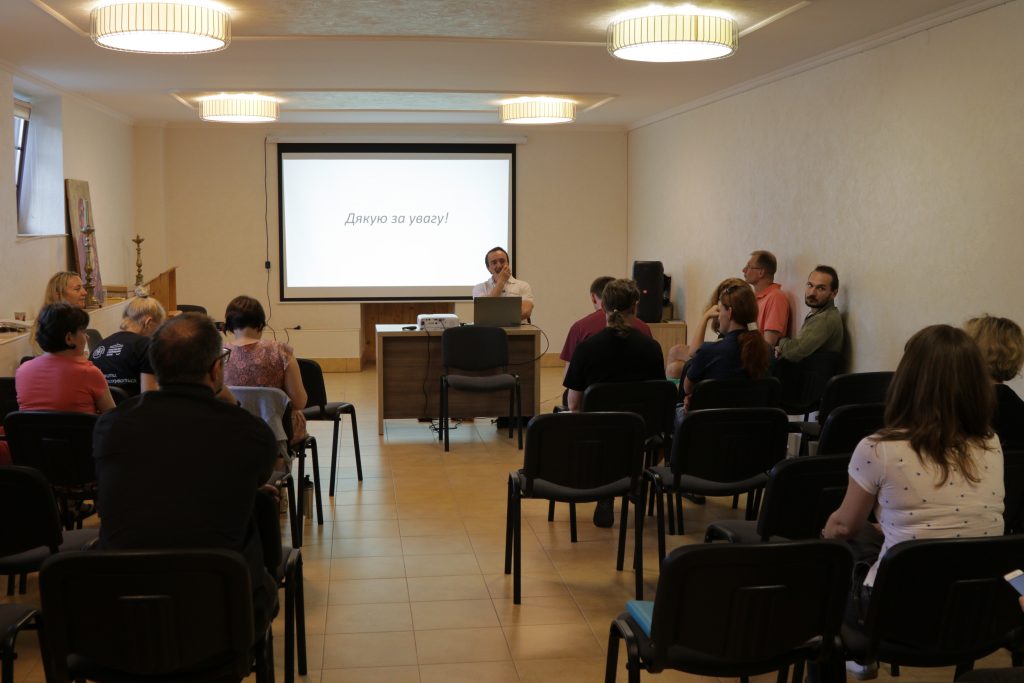 As a former political prisoner, Myroslav Marynovych talked about the spirituality of prisoners of conscience in the Soviet Gulag and the teachers who formed him in life. After the meeting, the participants of the Theology School shared their thoughts:  As one participant put it: “To defend the truth, to call things by their real names, to be able to say ‘I’m sorry,’ and to live so that human dignity has the highest significance: Myroslav Marynovych showed us so many human profiles and told stories from his life which had a deep influence on his formation. The words and examples of these people fortified his spirit. It was the kind of meeting in which we felt as if we ourselves had lived through these stories. We experienced their feelings and continued their lives in these stories in our hearts. We felt great gratitude to these people.” 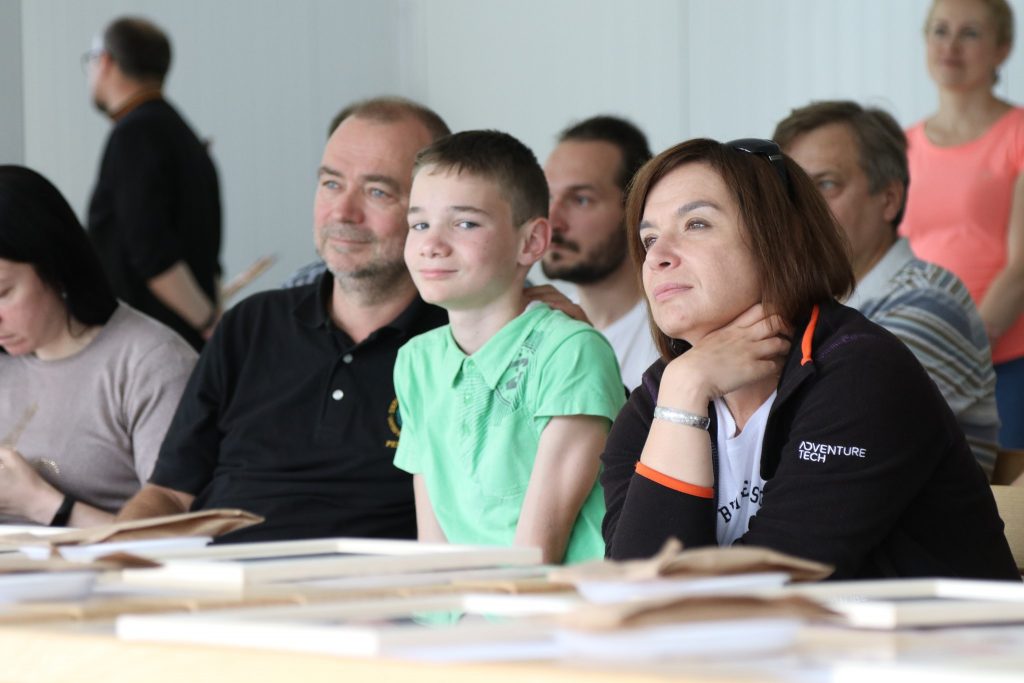 Sunday at the Theology Summer School was centered on the theme of family. And so, after catechism, the participants had free time with their families, and they also watched a film together. The program was so full that there was one more master class in liturgical singing, where everyone together learned the chants for the vespers service.

On July 6, the Theology Summer School had its ceremonial conclusion and the participants received certificates of successful completion.