There is anxiety but no signs of panic: 69% of Ukrainian companies have an anti-crisis plan – UCU Business School survey

The UCU Business School (LvBS) conducted a survey among Ukrainian entrepreneurs to determine the current dominant mood in companies and if they are developing and introducing anti-crisis measures in their businesses. 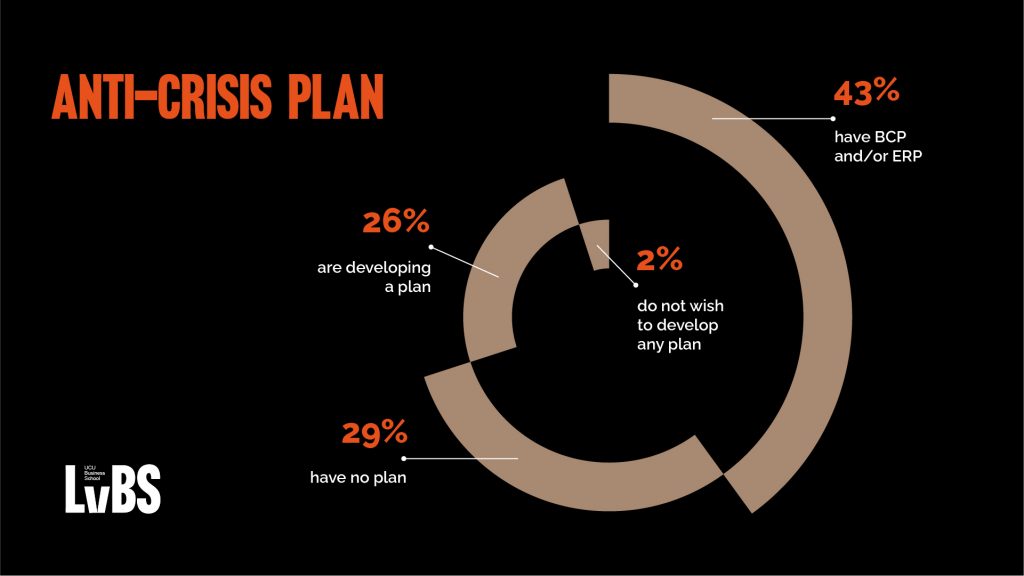 According to the survey, 69% of entrepreneurs have or are developing an anti-crisis plan of action; at the same time, 85% of them independently were developing plans at the level of top management and working groups in companies.

In an anonymous survey conducted from 16 to 21 February, 150 respondents took part; they were participants and graduates of master’s and certificate programs of LvBS. More than half of those surveyed (66%) were representatives of middle-level business in Ukraine, mostly owners and top managers (65%), and also specialists in personnel management (22%). Among the companies which took part in the survey: 47% were in the ІТ field and 16% in industry; the rest work in medical, educational, financial, and civil sectors, construction and HoReCa. 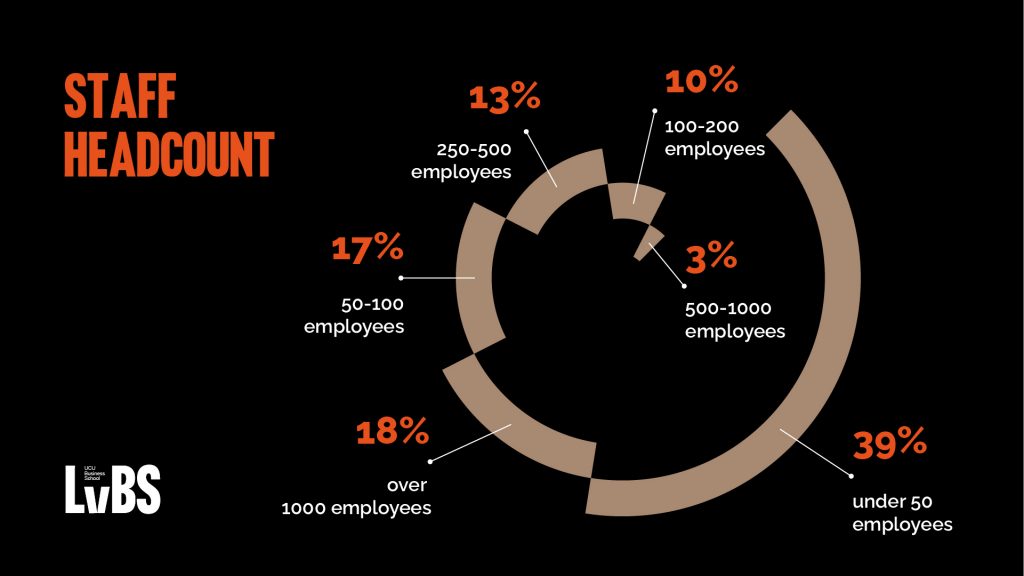 According to Yaryna Boychuk, СЕО of the UCU Business School, the goal of the research was to determine, in connection with the worsening of the situation in Ukraine and the possible start of large-scale Russian incursion, if the entrepreneurs have an anti-crisis plan of action, who exactly is responsible to develop and introduce it, do the companies feel a change (in income, expenses, profits) for an analogous period last year, and also what internal initiatives are the companies conducting to support personnel. 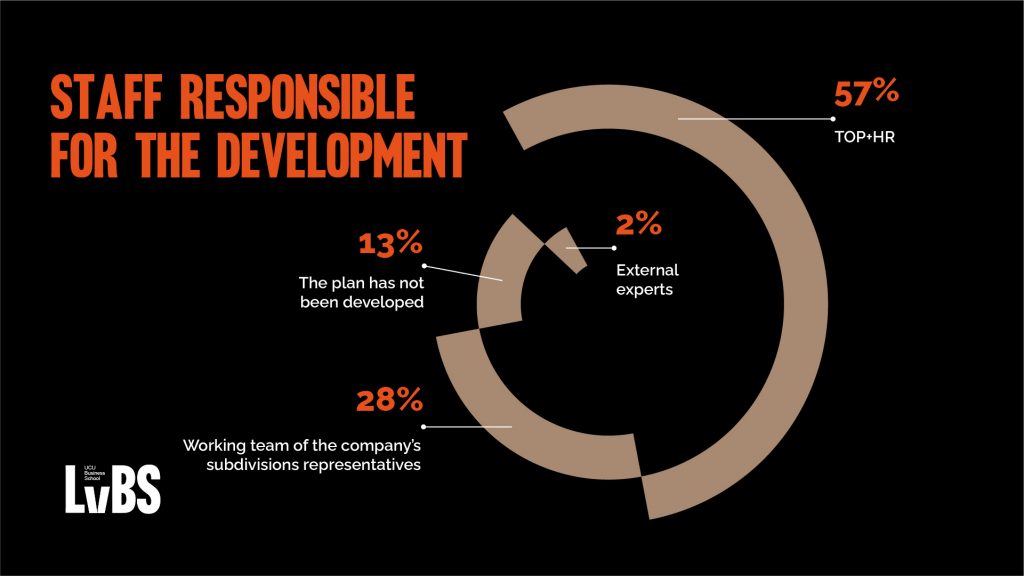 Today in crisis management there are two types of plans: BCP (Business Continuity plan) and ERP (Emergency Response plan). So, according to the survey, 43% have developed a Business Continuity plan or an Emergency Response plan and 26% are in the process of preparation. Only 2% of the respondents do not plan to consider an alternative plan of action in case of escalation.

The majority of the surveyed employers (73%) actively communicate to support their co-workers. However, 15% of respondents are not conducting such campaigns and 12,2 % have still not begun such communications. Among the instruments which companies use for communication are letters from management and communications at general meetings (55%), regularly informing co-workers about the situation in the country and in the company (45,6%), acquainting and discussing the points of the anti-crisis plan with teams (34,2%), and teaching teams how to provide medical first aid (18,1%). 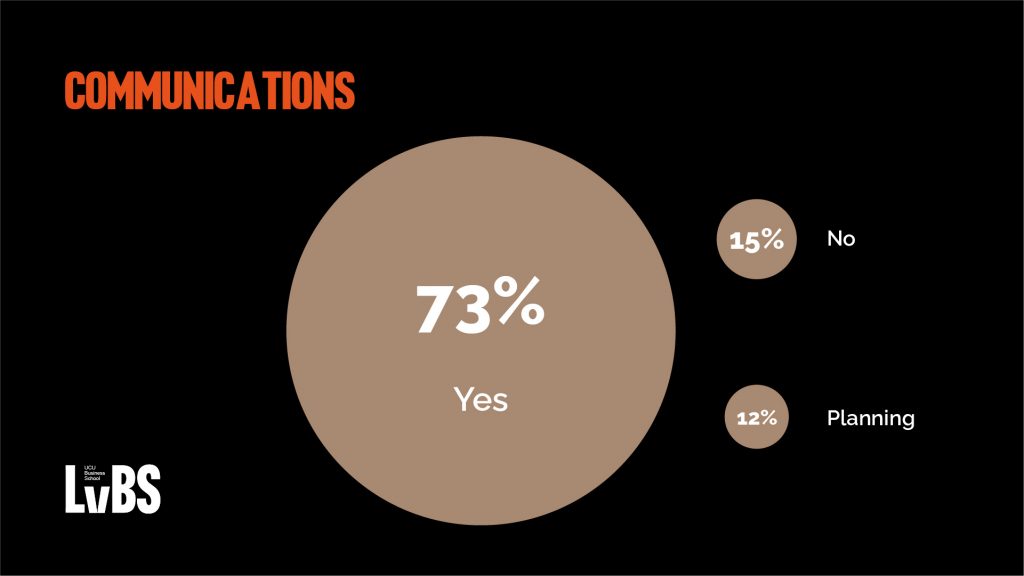 “We also asked the entrepreneurs how information about potential escalation has influenced their businesses. The respondents were able to choose from a number of possible responses. There are companies which stated that they notice, at the same time with a decrease in the productivity of the team, there is an increase in the number of orders and, correspondingly, the need for increasing the number of workers is growing,” states Khrystyna Dolna, COO of the UCU Business School. 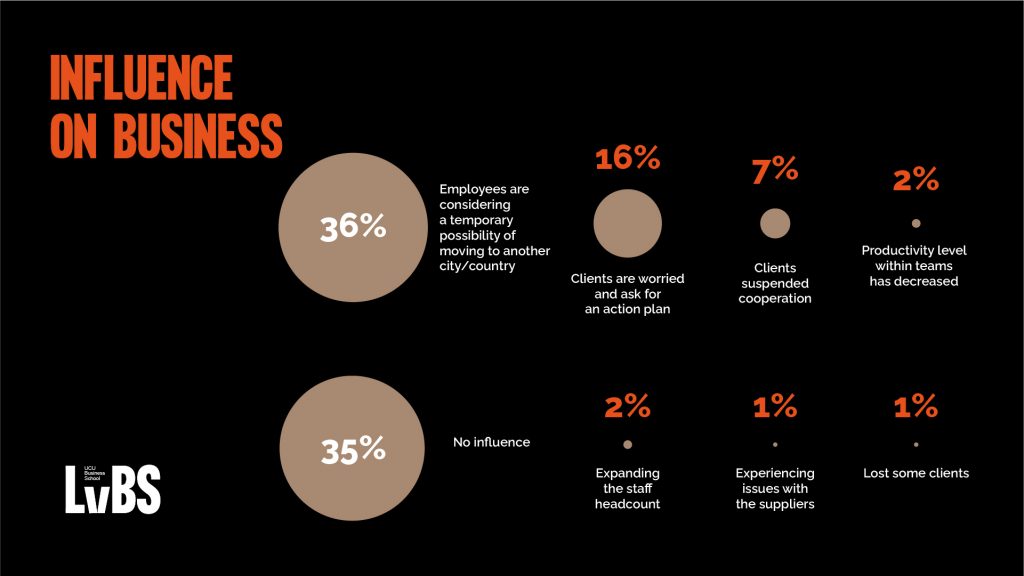 Analyzing the answers of our respondents, we prepared a list of questions which are worth including and writing into an anti-crisis plan of actions:

The majority of companies stated that they have answers to 80% of the described questions; some indicated that they see a need to take another look and add to some of them.

The next step is communicating the plan of action and launching initiatives to support workers in companies. Only 5% of those surveyed have not introduced more initiatives or are in the process of starting them. 95% of companies use the following instruments:

Only 2% of companies turned to outside experts for help, while 85% developed plans independently at the level of top management and working groups at the company.

“We also asked the entrepreneurs how information about potential escalation has influenced their businesses. The respondents were able to choose from a number of possible responses. There are companies which stated that they notice, at the same time with a decrease in the productivity of the team, there is an increase in the number of orders and, correspondingly, the need for increasing the number of workers is growing,” states Khrystyna Dolna, COO of the UCU Business School. 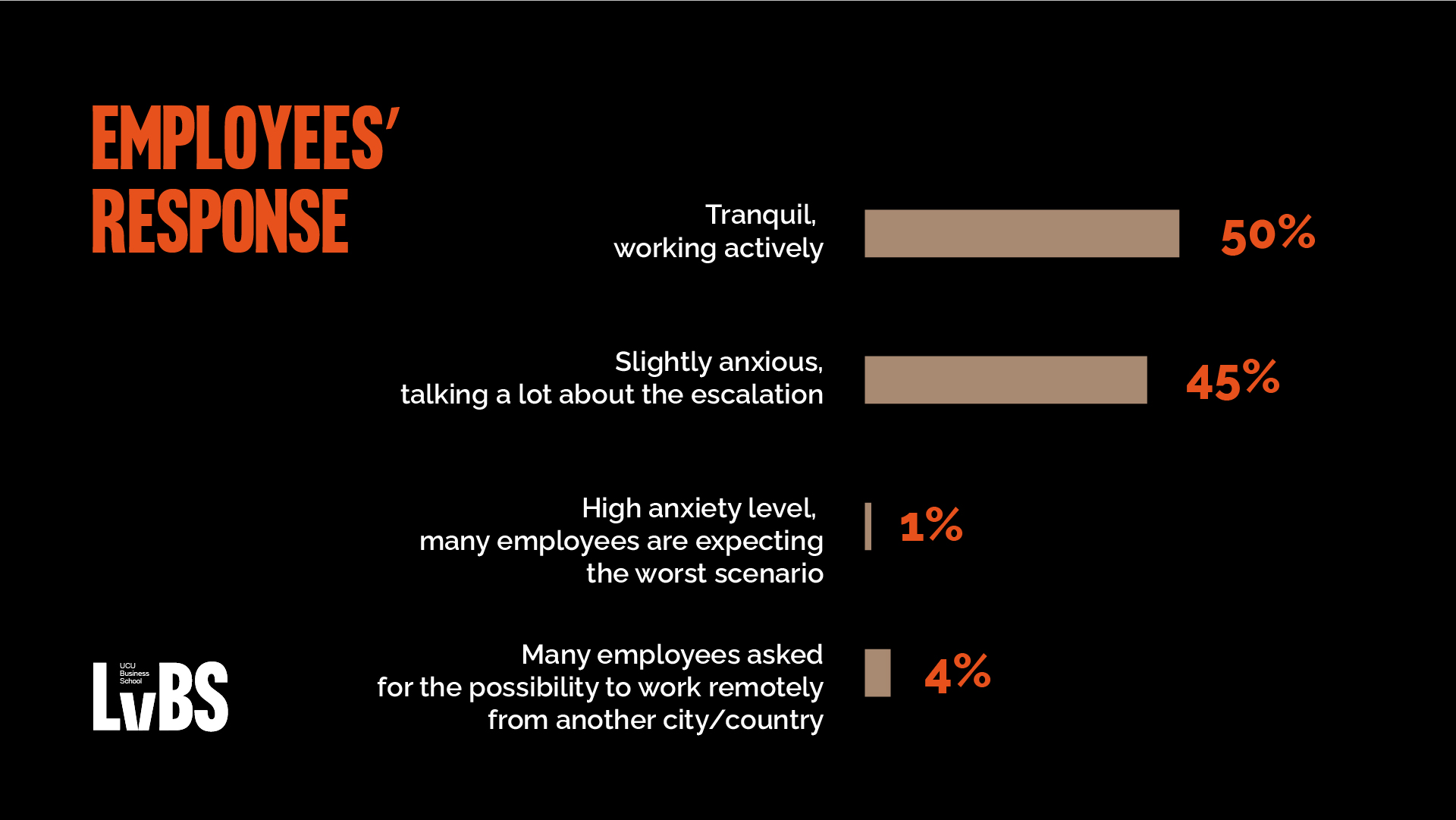 Asked “How has information about the possible escalation influenced your business?”

The UCU Business School also asked the entrepreneurs about the emotional state of their workers: “There is anxiety but no signs of panic. Regardless of the fact that a great number of companies stated that some are ‘anxious and there is much discussion of escalation,’ yet still the organizations continue ‘to work actively.’ Some companies stated that they feel how the cohesion of the team is growing,” adds Khrystyna Dolna, COO of the UCU Business School.

Choosing a response regarding consideration of the possibility of re-locating workers, 37% of respondents representing companies added that this includes the possibility of working remotely in other cities of Ukraine. It is worth stating that these options were suggested by representatives of fields like IT, industry, construction, HoReCa and transport services.

Asked if companies are considering or introducing additional initiatives, 26,8% of those surveyed responded that they still had not decided. 23% mentioned volunteerism (helping the army, volunteers, humanitarian activities). Among other important initiatives: support of families of co-workers who are involved with the Armed Forces of Ukraine and financial help to support the army.

Commentary on the survey:

The UCU Business School is in constant contact with business and, at this time of trials for the whole country, we see it as our mission to support entrepreneurs in all possible ways. We believe that, by helping companies to ensure their viability and preparedness for action and quick reaction to challenges which can arise on the road to standing up for our freedom and dignity, even in the face of military threat, together we are ensuring Ukraine’s socioeconomic stability.

Conducting a survey of business leaders who belong to the community of the UCU Business School, we see that entrepreneurs are not throwing up their hands but are taking a pro-active position and together with workers are preparing for various kinds of threats, getting involved in volunteerism and other types of support. Because prepared means armed, less alarmed and more resilient! With such companies and leaders we support defense from any enemy, and we become even stronger and more competitive both as businesses and globally as a nation on the world map.

Also, we now encourage business and all Ukrainians to support one another, to share the experience of introducing anti-crisis decisions and to consolidate around our common goal – a successful and peaceful Ukraine, a strong and independent nation of Ukrainians.

Our experience and the conducted survey in particular show that workers are grateful to their companies because they have pro-active (and not only reactive) anti-crisis plans and are ready to take responsibility. One fourth of the companies we surveyed are involved in volunteerism, help the army, and support families and their co-workers who are involved in the Armed Forces of Ukraine.

We are all aware that this is not the first day of war. However, as tensions increase, many of us recalled our status in 2014. What has changed in eight years? We have more experience, more viability (emotional and in business). Yes, there is also more concern for the country, but, at the same time, there is a great desire to fight and a certainty that we will win. Today’s world can learn much from us, for these extreme conditions motivate Ukrainians to look for new ways to manage organizations and approaches to leadership, in general.

Our company is located in Kharkiv. Just today [22 February- editor], I was supposed to leave for Lviv for a class at the UCU Business School. Discussing the situation with colleagues, I decided that now I need to stay in the city and be together with the team. Overnight the situation at the Ukrainian-Russian border worsened. So we are communicating much with the team; we’re doing everything possible. Leaders now cannot leave their teams in the epicenter of events.