By Matthew Matuszak|2019-08-12T01:46:32-04:00July 10th, 2019|News, UCU Foundation News|Comments Off on UCEF Remembers Donor in Alaska
On June 28, Joe Solimini, UCEF Chief Operations Officer, and Yulia Komar, Donor Relations Manager, participated in a memorial gathering at the home of the late Eugene Klymko in Anchorage, Alaska, on the 97th anniversary of his birth, to honor his memory and celebrate his life.  UCEF was kindly invited to this event by Tom Livingston, the executor of Mr. Klymko’s estate and his longtime friend and neighbor. (Mr. Livingston is seen in the photo with Yulia Komar.) 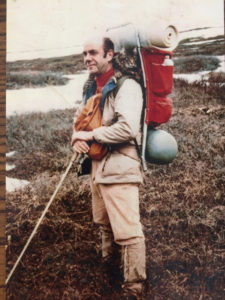 Eugene Klymko, a talented architect who miraculously survived the turmoil of World War II, being a witness and subject both to Soviet and Nazi brutality, lived a very simple life in his retirement, spending little on himself but being very generous in helping others. He was a generous annual major donor to UCEF for many years. Klymko had a special dedication to support the education of talented students in need at the Ukrainian Catholic University (UCU) and enjoyed receiving personal letters and cards from them. During his lifetime, he contributed 18 annual scholarships for UCU students. He also provided support for UCU professors’ salaries. In addition to this, after he learned from UCEF about the urgent need for UCU to have an additional living space for students, he gave a large leadership gift to support the construction of the second student residence for UCU by funding a room in memory of Bohdan Zenon Klymko.

Klymko was also a visionary supporter who decided to support UCU with a significant legacy gift. He left half of his estate to UCEF, providing for the continuous development of UCU to benefit new generations of Ukrainian leaders and professionals who will be equipped to change the world for better.

May he rest in peace, and his legacy lives on in the younger generation he cared for so dearly!