On 14 December in Kyiv, the Ukrainian Catholic University held its 12th Annual Charitable Evening and Silent Auction. During the event, at which more than 350 friends of UCU participated, 90 scholarships for students and 10 stipends for teachers were pledged. The total amount of donations exceeded 13 million hryvnias.

The evening began with cocktails: old friends chatted and also became acquainted with guests who came to support UCU for the first time.

In attendance at this year’s charitable evening were ministers, national deputies from Parliament, representatives of business, lawyers, civic activists, and ambassadors from Spain, Austria, Canada, Estonia, and France. Bishop Stepan Sus, one of UCU’s first graduates and the youngest bishop, who will soon serve the UGCC in Kyiv, began the evening’s festivities with prayer and a short address. 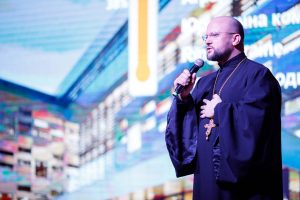 “Twenty years ago I crossed the threshold of UCU. This institution truly helped me grow, gave hope, and formed in me something important for the Church and Ukrainian nation. I am sincerely grateful to the benefactors who for all these years have opened their hearts for the good of our future.” So the world’s youngest bishop spoke of his story at UCU. “I ask you to support UCU! At 38 years old, I feel like the youngest, but I am certain that I received a good education, which gives me the ability to live through periods of turbulence and trust the pilot. My pilot is the Lord God and I hope that all of us find our pilot.” So Bishop Stepan Sus ended his short speech.

Another graduate of UCU’s Faculty of Theology and Philosophy, Maria Makovetska, also spoke. She talked about how the support of benefactors influenced her future, and she thanked all the friends of UCU for their support: “When I was preparing this speech, I remembered how I felt when I had to choose a university. It was difficult for me to decide, but somehow I came with my grandfather to the open house of the Faculty of Theology and Philosophy and made a definite decision. When I graduated in 2005, my diploma was still not even recognized by the government. But I have used those ethical principles that the university formed in me throughout my whole life. When I think now why I donate to this institution, I understand that, among the things that can be achieved, education gives the most possibilities.” So the UCU graduate spoke in summary.

Between speeches, guests and friends of UCU watched a brief film about today’s students, who incarnate UCU’s values in their projects, volunteerism, and civic activism. Next on stage was the evening’s distinguished guest, a British diplomat who served as the Extraordinary and Plenipotentiary Ambassador of Great Britain to Ukraine (2002-2006), Robert Brinkley. Mr. Brinkley is also a Senator of UCU and the Director of the Ukrainian Institute in London. 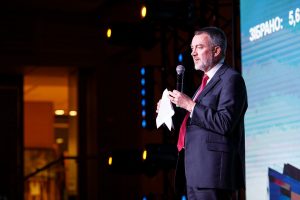 He began his speech in Ukrainian but then continued in English. He spoke of his friendship with the university and the history of UCU’s branch in Great Britain: “When I was a British diplomat and preparing to become ambassador to Ukraine, in Campion Hall, the Jesuits’ building at Oxford, I happened to meet Fr. Brian Daley, an American Jesuit. Speaking with him, I received the advice to visit UCU to see the incredible accomplishments of Fr. Borys Gudziak and Jeffrey Wills with my own eyes. So in 2002 I first heard of UCU. When my wife and I first visited this university that year, it was our first trip outside Ukraine’s capital. Fr. Borys then gave us a tour of the university, which then had only one building.”

The diplomat was impressed, in particular, by the witness of the underground existence of the Ukrainian Greek-Catholic Church, persecuted by the Soviet government, which was preserved in the university’s small museum. “After this, when I left the diplomat service, I visited UCU as a lecturer. At the start of 2013, Bishop Borys telephoned me in London and invited me to join the Senate. I immediately agreed! Today I am very proud that I became a part of UCU, which has, in turn, become an important part of my life,” Brinkley admitted.

“At the basis of the miraculous creation of UCU is the Lord Himself, and faith that nothing is impossible for Him,” added the diplomat. “UCU’s development, however, is significantly more than the number of students or buildings. It’s about reputation and quality. This is not only a private institution, independent of the government, which strives to be a leader in the area of high academic and ethical standards in a country where too many educational institutions are not developing and do not meet expectations because of corruption. UCU is a university that witnesses, that serves, and that communicates,” he said in summary.

Robert Brinkley concluding his talk with an account of the Ukrainian Institute in London: “Forty years ago, Patriarch Josyf Slipyj started the Ukrainian Institute in London. In 2015, after the director of the institute resigned, UCU’s rector asked me to create a governing committee, which would develop a plan of action for the Institute. We had a competition and placed Marina Pesenti in the position of new director. She worked for two years without pay. Three years ago, the Institute was revived and registered as a charitable institution. Since then it has constantly grown as it strives to inform the British citizenry about Ukraine and Ukrainians.”

As is traditional, the evening’s culmination was the speech of Archbishop Borys Gudziak, Metropolitan of Philadelphia and President of UCU: “I always leave UCU’s charitable evenings with a feeling of blessing.“ So he began his talk to guests and friends of UCU. “In the world, unions, traditions, and laws of peace are quickly ruined. These are all very easy to destroy. But this university operates above institutions, not only organizational and bureaucratic but above institutions of civil society which gather around a common matter. I am deeply grateful to you for this annual meeting, because this is truly an institute that inspires, unites, and gives perspective.”

“UCU is not a community of saints,” he continued. “But this university has dreams. It is open to the sacramentality of our lives and calls to all people of good will: students, entrepreneurs, lawyers, artists, politicians, and ambassadors. And they come. And we all leave these gatherings with ‘little wings.’ In the name of the Rector’s Office, professors, technical workers, housekeepers, and students, I want to thank you for helping us support and develop this ‘laboratory of dignity,’” Archbishop Borys summed up.

The full Ukrainian-language text of his speech will soon be available on the UCU website. 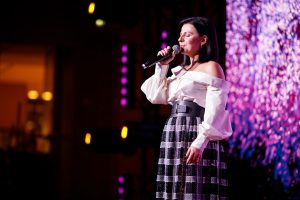 After the inspiring words of honored speakers and an auction, Oksana Mukha came to the stage. She is a winner of the “Voice of Ukraine” show, a singer, violinist, and ambassador of Ukrainian song on the world stage. After the musical break, the event’s emcees, Volodymyr Ostapchuk and Kateryna Tymoshenko, ran a lottery with prizes from partners of UCU: 12 embassies and entrepreneurs who are friends of UCU. The evening concluded with the announcement of the names of the winners of the silent auction. 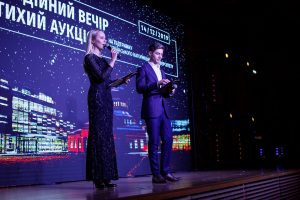 We thank our partners, sponsors, and benefactors for the opportunity together to create  new, high quality of education in Ukraine and raise a new generation of moral leaders for Ukraine.

The annual Charitable Banquet in Kyiv is a traditional event in support of the Ukrainian Catholic University which has happened since 2008. The banquet is organized by the Kyiv Friends of UCU. Every year the event’s Honorary Committee is formed, composed of leading church activists, politicians, business people, and artists. Traditional activities at the Charitable Banquet are a silent auction of works of art and a lottery, the items of which are provided by private benefactors, including Ukrainian and foreign companies and also embassies.