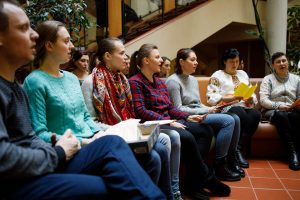 Generally, some 150 to 200 people visit UCU’s Faculty of Theology and Philosophy for the event. And volunteers bring food and song to another 700 at a psychiatric hospital, prison, and palliative-care facility in Lviv and help organize a Christmas Eve dinner at a home for the elderly in the city of Rohatyn.

The idea dates back to the times of Metropolitan Andrey Sheptytsky (first half of the 20th century). He started the tradition at the Lviv Theological Academy, UCU’s predecessor. 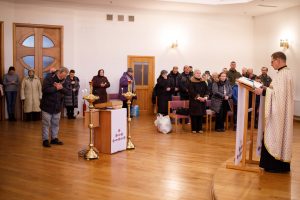 According to UCU graduate Nazarii Petriv, who has volunteered for the last 11 years, the event begins with caroling and a Christmas play, then a service in the chapel and dinner. A priest is also available so that, if they wish, visitors have an opportunity for the sacrament of confession. “For us it’s important,” says Petriv, “not only to provide for the material (food and drink) but also to help the person prepare spiritually to experience the birth of the Son of God.” 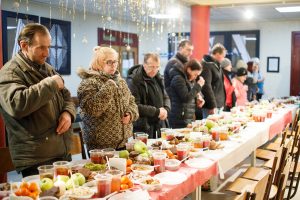 The volunteers themselves, over the days of preparation for the event, become a real family. Some have recently lost family members and are glad to have an opportunity to bring the Good News to those who need it.