On March 4, 2021, the Institute of Church History and the Kyiv Center of the Ukrainian Catholic University (UCU) organized an international conference “The ‘Lviv Council’ of 1946: Historical Circumstances and Modern Assessments.” As the organizers state, the conference marked the sad 75th anniversary of the Lviv Pseudo-Council (March 8-10, 1946), at which the “re-union” of Greek-Catholics of the Metropolitanate of Halych (Ukraine) with the Russian Orthodox Church was proclaimed. Some 30 leading specialists from Ukraine, Poland, Romania, Slovakia, and representatives of the government and the Church participated.

As Patriarch Sviatoslav Shevchuk, head of the Ukrainian Greek-Catholic Church and Grand Chancellor of UCU, said to those present: “The Lviv Pseudo-Council was a tragic event which began the liquidation of the Ukrainian Greek-Catholic Church. Thanks to new sources which we managed to receive, working from archives of the SSU [Security Service of Ukraine], we have new possibilities, and today we can hear about the first fruits of this work. Until recently, these sources were marked ‘top secret.’ The truth we hear at the conference might be painful but it liberates.”

Oleh Turiy, director of UCU’s Institute of Church History and UCU Vice-Rector, talked about the historical precedents in the preparation of the “Lviv Council” of 1946. Among other things, he mentioned the work of Ukrainian-Canadian Professor Bohdan Bociurkiw “The Ukrainian Greek Catholic Church and the Soviet State (1939- 1950).” “Bociurkiw… presented the thesis that in the political destruction of the UGCC there was not only the aspect of atheist logic but also of imperial. Those who today defend the rights of the Church should also rely on the historical experience of that deep faithful to their Church of those who did not submit to the provocations of the Soviet government. We see this faithfulness during the ‘Lviv Council.’” 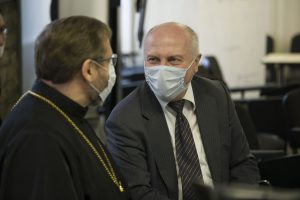 According to Ruslan Delyatysnkyi of John Chrystostom Academy in Ivano-Frankivsk, “the massive arrests of the clergy, in the calculations of the structures of the NKVD [predecessor of the KGB], were intended to create a create psychological groundwork to impel the clergy to the following steps, transferring to and ‘re-uniting’ with the [Russian Orthodox Church].”

Visiting scholars from Poland, Romania, and Slovakia recounted similar efforts of the atheist government to persecute Eastern-rite Catholic churches in those countries.