The first Perelaz folk-ball on the American continent was held in the Philadelphia (USA) area, a charitable party to support the Ukrainian Catholic University. Approximately 300 participants partied for seven hours, donating more than 100 thousand dollars in support of UCU on October 9.

St. Michael the Archangel Parish in Jenkintown, Pennsylvania, hosted the event. “It’s a great honor to be the first place in America to continue a wonderful tradition like Perelaz in support of the Ukrainian Catholic University. ” So Auxiliary Bishop of Philadelphia Andriy Rabiy greeted the guests. 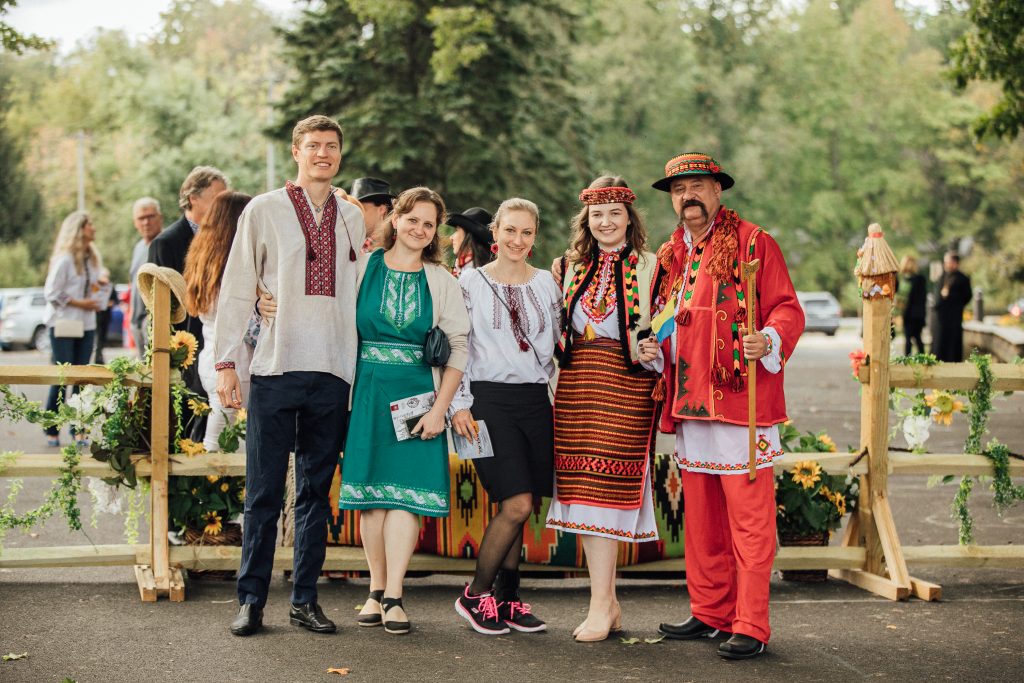 It’s worth noting that this event was planned for a few years, and, if not for the quarantine, it would have happened last year. “A number of friends from Lviv came for the enthronement of Metropolitan Borys Gudziak in 2019. And we started to discuss the idea of collecting funds in Philadelphia for the support of students and projects of the Ukrainian Catholic University. We immediately decided that the best format would be the Perelaz folk-ball, and the most appropriate place would be the territory of Mykhailivka [St. Michael’s], which also functions as a spiritual-cultural center for Ukrainians in Philadelphia.” So said the head of the organizing committee, Askold Sandurskyy. 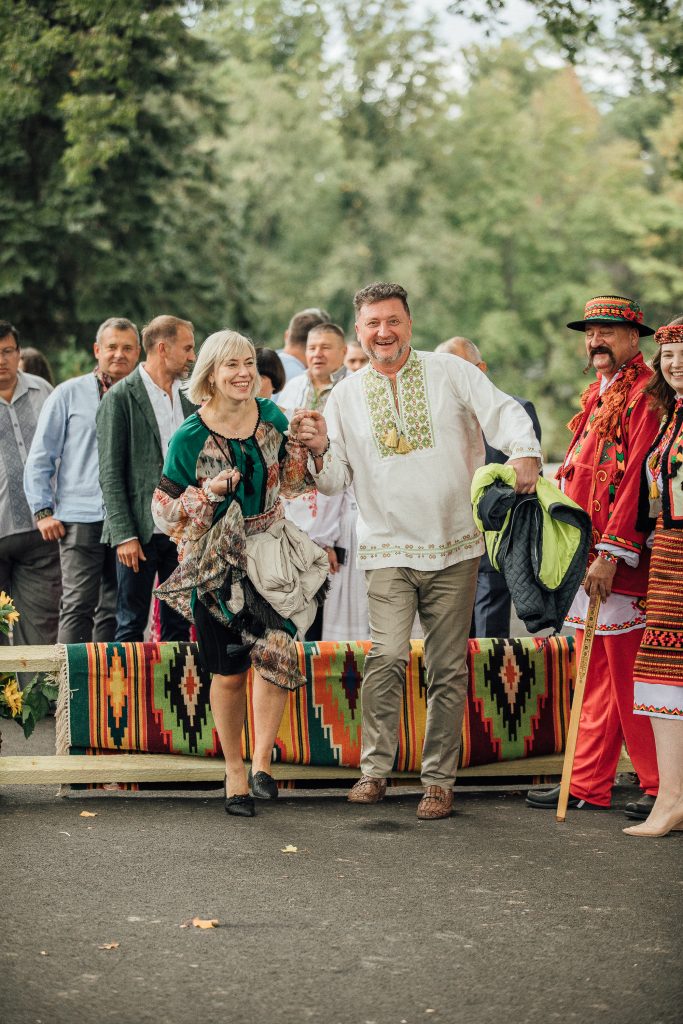 One of the guests of the folk-ball was Ukrainian Ambassador to the USA Oksana Markarova. She acknowledged that for her this was not simply a matter of protocol but an opportunity to continue a tradition in support of UCU. “Even if I had many cities to choose from, I would still be right here. My family and I didn’t miss any activities for UCU in Lviv or in Kyiv. And now, when the first such event is happening here, in America, of course I couldn’t miss it, not only as ambassador to the USA but as a long-time member of the Friends of UCU,” stated the ambassador. 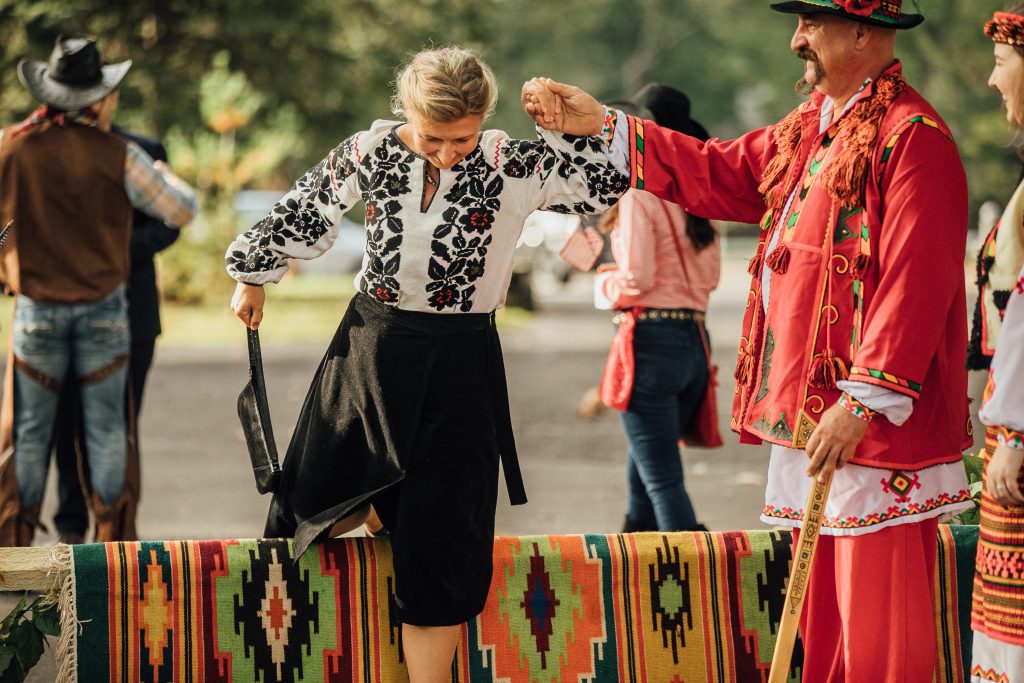 Even though this was the first time for Perelaz in Philadelphia, for UCU this is a tradition of many years. In order to bring over some atmosphere, not only UCU Vice-Rector Myroslav Marynovych came from Lviv, but also more than 40 Ukrainian entrepreneurs, long-time friends and benefactors of UCU for whom this has long been a favorite party and a customary way to support the university in Ukraine.

“I don’t know if so many people would travel so far to Philadelphia for any other event. This is an important precedent. Philadelphians, now we need to travel together as guests to Lviv.” So Metropolitan of Philadelphia and President of UCU Archbishop Borys Gudziak joked in his talk. 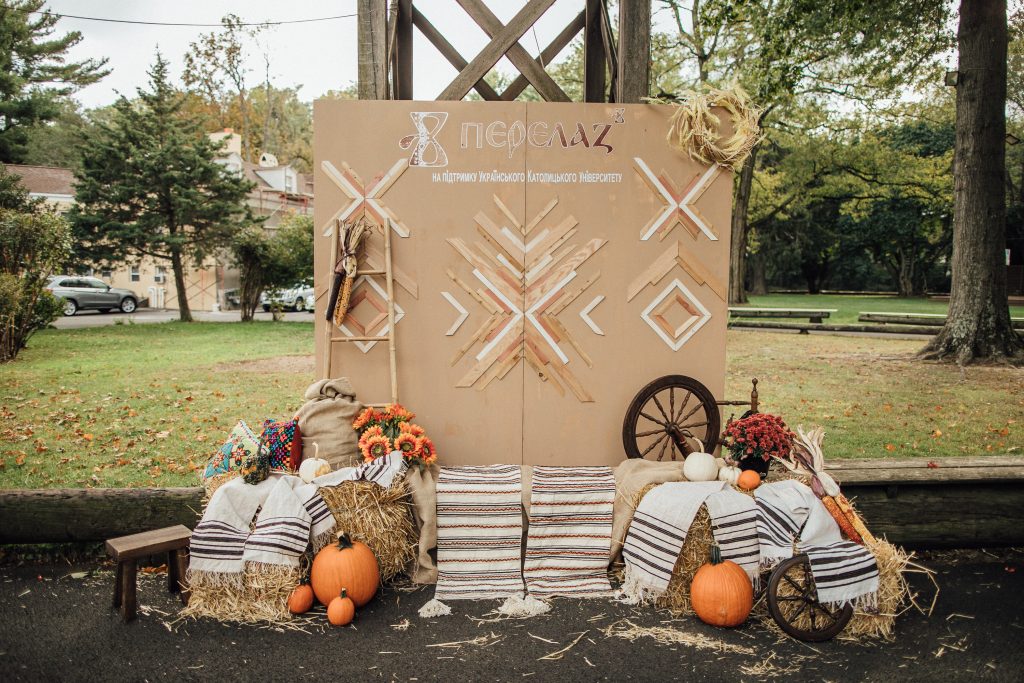 Metropolitan Gudziak thanked all the evening’s benefactors and also acknowledged that the circle of friends of UCU is a network. “Philadelphia belongs to 20 cities that have committees that support UCU. And this network of support and love, I am convinced, will continue to transform the university community,” he stated.

UCU Vice-Rector Myroslav Marynovych also thanked the global Ukrainian community for giving UCU important leaders. “Without the expatriate of Syracuse and Harvard Archbishop Borys Gudziak, a Ukrainian from Belgium Fr. Mykhailo Dymyd, and a number of other diaspora Ukrainians, UCU would be like 220 other universities unable to overcome the genetic defects of communist education. UCU has gathered around itself those Ukrainians who suffocated in the stale atmosphere of ‘Soviet man’ and found in the university a space for self-realization and inspiring work.” 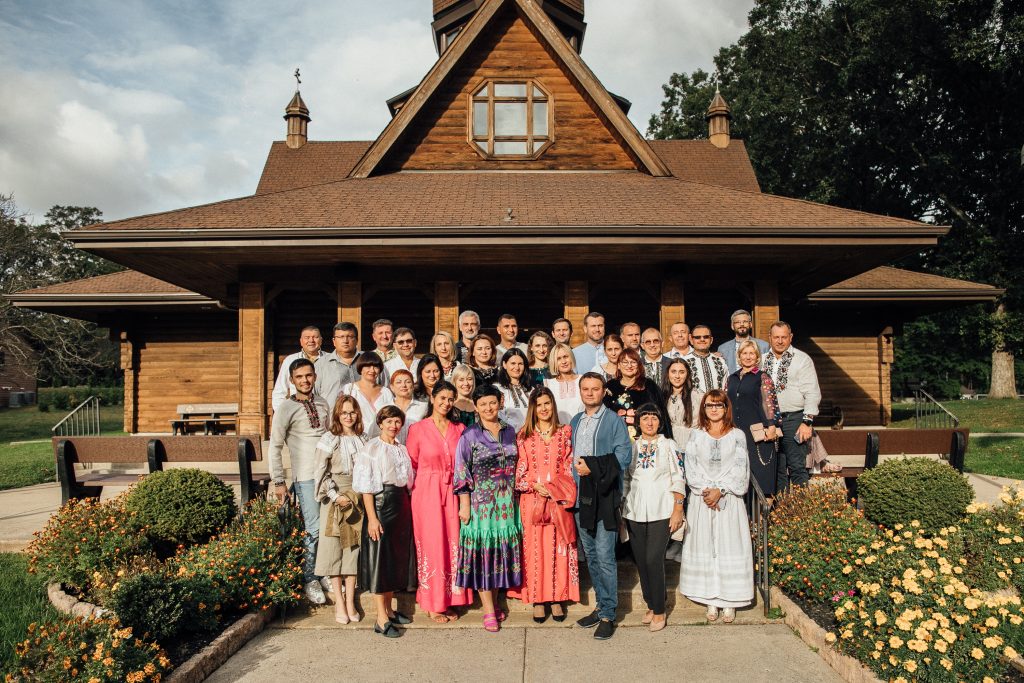 A key part of Perelaz is the charity auction of artworks. Philadelphia was no exception. The guests fought for 14 lots, including icons and graphics of noted Ukrainian artists and necklaces and designer Christmas decorations.

The musical atmosphere was created by Viktor Morozov and a separate surprise for the guests was an ethno disco by Oleh Skrypka who came in for the party in Philadelphia.

The sponsors of the event were Ukrainian Selfreliance Federal Credit Union, Meest, and Askold and Svitlana Sandurskyy. 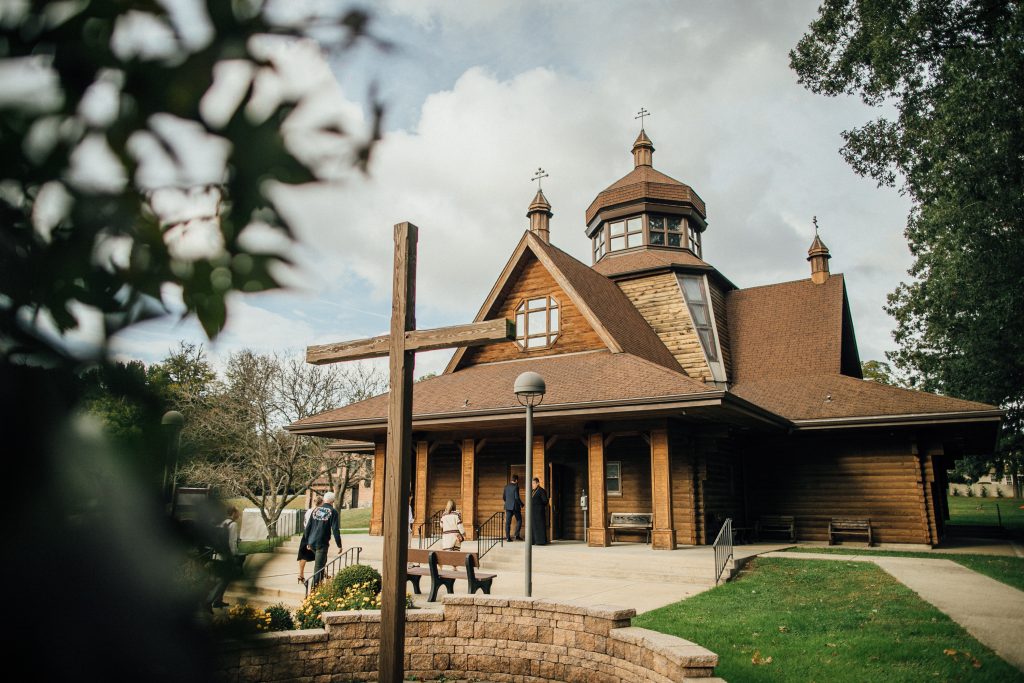 Student scholarships were donated by Dr. and Mrs. George and Roma Temnycky, Mrs. Oksana Bachynsky-Tarasiuk, Dr. and Mrs. Andrew and Christina Tershakovec, Capt. and Mrs. Stephen and Julia Szyszka, and also Assumption of the BVM Parish in Perth Amboy. Also donating to the scholarship fund were St. Josaphat Parish in Trenton, St. Nicholas Parish in Passaic, Mr. and Mrs. Ihor and Vira Zharyi, and numerous others. With their donation, the Durbaks supported the decoration of UCU’s University Church of the Holy Wisdom of God. The largest donation, $20 thousand, was made by an anonymous donor.

During the evening it was announced that Dr. Oleh Tretiak and his sister, Christina, donated a significant amount to establish a scholarship fund for the support of talented UCU students in memory of their parents, Maria and Kost. 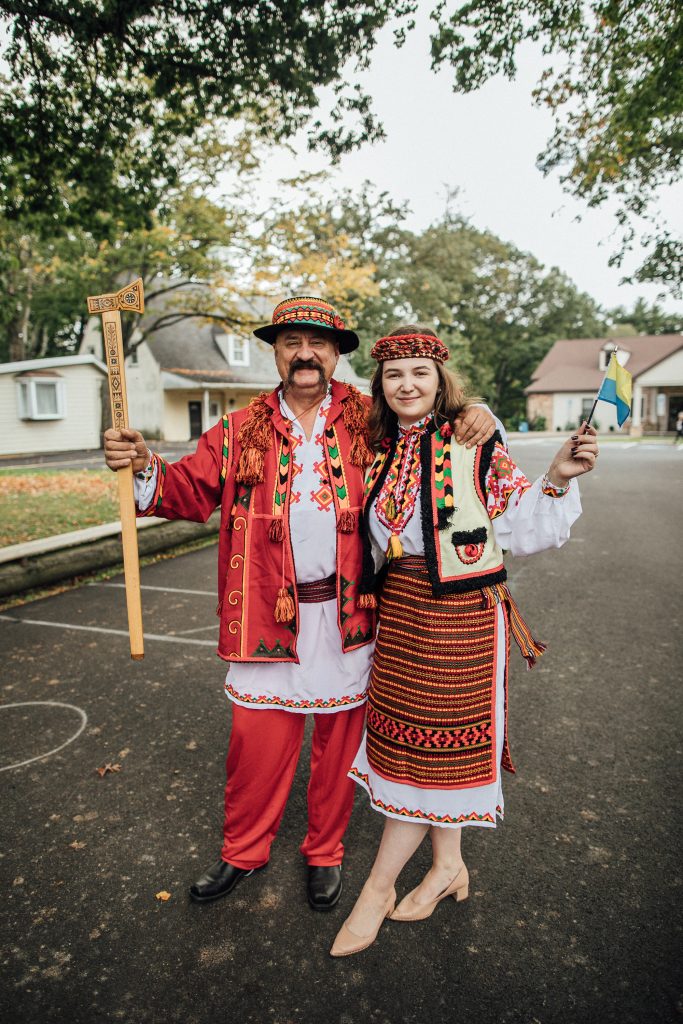 On behalf of the community of the Ukrainian Catholic University, we thank the organizing committee, headed by Askold Sandurskyy, for their dedicated work in preparing and executing the USA’s first Perelaz folk-ball.

“The Ukrainian Catholic University is concerned about our future, about the mentality and vision of statehood that our young people will have.”

“My mother and father attended Perelaz in Lviv a number of times and talked about this fine family celebration. So I was glad to travel here from New York. Many friends are here, and it’s nice just to talk to people. If it’s good enough for the vladyka, it’s good enough for me.”

Ihor Zharyi, member of the parish council of St. Michael the Archangel Church

“What good is ‘success” without conscience, humanity, or faith? I support UCU because this university understands that.”