On Sunday, February 23, UCU awarded an Honorary Doctorate to Vera Andrushkiw in Detroit during a celebration of the 85th anniversary of the Ukrainian National Women’s League of America, Detroit Branch.

Natalia Klymovska, UCU Vice-Rector, said: “It was an honor and a great pleasure to award the honorary doctorate of UCU to Mrs. Vira Andrushkiw. The Honorary Doctorate is the highest honor of the university for the best teachers who are examples to us through their lives.

“Mrs. Andrushkiw was one of the first teachers for UCU, which at the time only lived in the imagination of several people, including Borys Gudziak, a young historian who moved from America to Ukraine to restore church and community life here. With this recognition, we want to thank, on behalf of the entire UCU community, a person already well known in the country of the university, Mrs. Andrushkiw, for her teaching.”

The title “Doctor honoris causa of the Ukrainian Catholic University” is the highest honor that the university has established, with the goal of honoring people for their services in the field of education, culture, and art, and ministry for the glory of God, the common good, and human dignity. This title is given to people whose activities reflect the values by which the university lives and which it considers it its mission to spread.

Vera Andrushkiw, civic activist, pedagogue, active member of the Ukrainian National Women’s League of America, headed the Detroit Committee for the Defense of the Persecuted in Ukraine (1972-1976), was the director of Ukrainian studies summer schools at Harvard University (1997-1999), taught at Wayne State University (Detroit) and the University of Michigan (Ann Arbor) (1985-1999), and since 1999 has been the director of the partnership of communities program of the US-Ukraine Foundation in Washington. 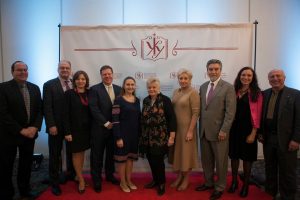 A civic activist, she was also actively involved in preserving the memory of the Holodomor in the USA. This year she took part in a sociological conference in Michigan where she met participants of a conference on the theme of the Holodomor-genocide of 1932-1933 and also offered educational materials which teachers can use to teach themes of genocide in U.S. schools.

After Ukraine declared its independence, Mrs. Andrushkiw became actively involved in the development of business education in Ukraine, in particular, for a number of years she helped organize student internships at the newly-created Lviv Institute of Management at the Business School of Wayne State University. For this, she received a grant from the American government for an exchange of professors from Ivan Franko University in Lviv, Lviv Polytechnic, and the

Lviv Institute of Management, thanks to which the teachers had the opportunity to develop new courses, materials, and translations of textbooks in economics.

She later headed the Detroit branch of the Ukrainian National Women’s League of America (UNWLA). With the start of the war in eastern Ukraine, UNWLA, with the active involvement of Mrs. Andrushkiw, started helping the volunteers, sending food and clothes both for soldiers and for refugees. Thanks to UNWLA financing, the Ukrainian Catholic University opened the UCU Horizon of Hope Center for Psychological Consultation, in which all who suffer because of the war can receive free expert psychological/psychotherapeutic help at current international standards.

Mrs. Vera Andrushkiw is actively involved in supporting UCU and activities of the Ukrainian Catholic Education Foundation, co-chairing the Friends of UCU Committee in Michigan, and she helped the development of the UCU Lviv Business School with advice and contacts.