Ukrainian Catholic University is among 50 volunteer groups whose representatives are receiving this year’s award for volunteer activity from Ukrainian President Volodymyr Zelenskyy. 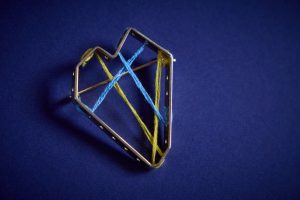 In his address on Volunteers’ Day, the president emphasized: “Today volunteers are the most powerful part of Ukraine’s civil society. This is a movement which unites all cities and communities of our country and all social groups. And this is an idea which involves millions of people from various countries of the world in the Ukrainian fight for freedom.

Glory to all who help in our defense!

Glory to all who help our volunteers!”

Many volunteer initiatives operate at UCU. With the start of Russia’s full-scale invasion of the territory of Ukraine, activities have been aimed at supporting the military and those who suffer from the consequences of war.

“Our staff has been able to devote not only time but its maximum professional efforts to help those who serve others,” says UCU Rector Fr. Bohdan Prach.

UCU’s Volunteer Brigade, which has now operated since 2014, is actively involved in the area of medical help. The UCU Volunteer Center continues to work in the hall of the Sheptytsky Center and to support our soldiers and civilians in their needs. From 24 February to 24 September, the UCU Volunteer Center provided 221 776 units of medicine, 89,009 food items, 77,032 hygiene items, 42,611 units of tactical medicine, 12,425 equipment items, 11,100 household items, 8,600 clothing items, 3,792 units of tactical gear, and 606 technical items.

The UCU Library continues to collect literature for children and adults who have had to leave the country and for educational centers which have suffered from Russian bombing. The Emmaus Center continues to operate and adapt its activities to new realities. For example, the center conducted a 5-day camp for internally displaced persons in families with children with special needs.

UCU actively fights on the field of the information war. A separate webpage has been created to gather and preserve information about the university’s work in conditions of war in English. UCU professors and graduates of the School of Journalism and Communications developed an instructional site Post to Stop War, whose mission is to make dialogues about the war effective abroad. In the project Little Stories about a Big War, the university’s team gathers and tells stories of ordinary Ukrainians who remain in the background but, like soldiers on the front lines, demonstrate exceptional endurance and bravery.

Under the care of the Dean’s Office of Pastoral Ministry at the university, daily liturgical services are held, memorials for those who have died during the war, and spiritual direction and discussions with refugees. A crisis counseling center is operating. The consultants are UCU master’s-degree students under the direction of professors.